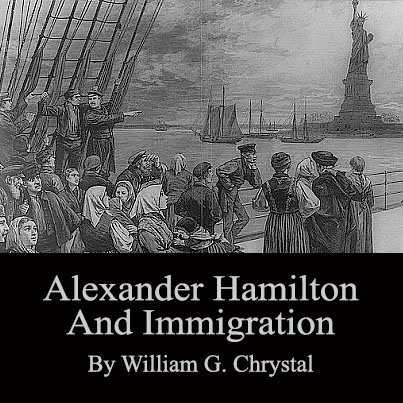 One of today’s hot button issues is immigration.  Readers may be surprised to learn that it was also an important topic in the early American Republic.  In 1801, President Thomas Jefferson wrote at length about immigration in his First Annual Message to Congress. Jefferson urged massive immigration to the United States.  Alexander Hamilton, in an opposition role, writing under the pseudonym Lucius Crassus, thought otherwise. New residents, he noted, needed time and an inclination to become Americans.

Included here is an excerpt from Hamilton’s thoughts on immigration. They were offered at a time when the “path to citizenship” took fourteen years. In the quoted segment, one sees Hamilton’s political realism at work.  Hamilton even uses Jefferson’s own book, Notes on Virginia, to show how newcomers remain deeply attached to the land of their birth. The President, who earlier embraced limited immigration, had obviously changed his view.  This, Hamilton believed, was detrimental to the nation.

“The safety of a republic depends essentially on the energy of a common national sentiment; on a uniformity of principles and habits; on the exemption of the citizens from foreign bias, and prejudice; and on that love of country which will almost invariably be found to be closely connected with birth, education, and family.

“The opinion advanced in the Notes on Virginia is undoubtedly correct, that foreigners will generally be apt to bring with them attachments to the persons they have left behind; to the country of their nativity, and to its particular customs and manners. They will also entertain opinions on government congenial with those under which they have lived; or, if they should be led hither from a preference to ours, how extremely unlikely is it that they will bring with them that temperate love of liberty, so essential to real republicanism? There may, as to particular individuals, and at particular times, be occasional exceptions to these remarks, yet such is the general rule. The influx of foreigners must, therefore, tend to produce a heterogeneous compound; to change and corrupt the national spirit; to complicate and confound public opinion; to introduce foreign propensities. In the composition of society, the harmony of the ingredients is all-important, and whatever tends to a discordant intermixture must have an injurious tendency.

“The United States have already felt the evils of incorporating a large number of foreigners into their national mass; by promoting in different classes different predilections in favor of particular foreign nations, and antipathies against others, it has served very much to divide the community and to distract our councils. It has been often likely to compromise the interests of our own country in favor of another. The permanent effect of such a policy will be, that in times of great public danger there will be always a numerous body of men, of whom there may be just grounds of distrust; the suspicion alone will weaken the strength of the nation, but their force may be actually employed in assisting an invader.

“In the infancy of the country, with a boundless waste to people, it was politic to give a facility to naturalization; but our situation is now changed. It appears from the last census that we have increased about one third in ten years; after allowing for what we have gained from abroad, it will be quite apparent that the natural progress of our own population is sufficiently rapid for strength, security, and settlement. By what has been said, it is not meant to contend for a total prohibition of the right of citizenship to strangers, nor even for the very long residence which is now a prerequisite to naturalization, and which of itself goes far towards a denial of that privilege. The present law was merely a temporary measure adopted under peculiar circumstances, and perhaps demands revision. But there is a wide difference between closing the door altogether and throwing it entirely open; between a postponement of fourteen years, and an immediate admission to all the rights of citizenship. Some reasonable term ought to be allowed to enable aliens to get rid of foreign and acquire American attachments; to learn the principles and imbibe the spirit of our government; and to admit of a probability at least, of their feeling a real interest in our affairs. A residence of not less than five years ought to be required.

“If the rights of naturalization may be communicated by parts, and it is not perceived why they may not, those peculiar to the conducting of business and the acquisition of property, might with propriety be at once conferred, upon receiving proof, by certain prescribed solemnities, of the intention of the candidates to become citizens; postponing all political privileges to the ultimate term. To admit foreigners indiscriminately to the rights of citizens, the moment they put foot in our country, as recommended in the message, would be nothing less than to admit the Grecian horse into the citadel of our liberty and sovereignty.”

William G. (Bill) Chrystal is a scholar/performer of Alexander Hamilton and John Adams.  He is the author of Hamilton by the Slice: Falling in Love with Our Most Influential Founding Father and the editor of Thomas Jefferson and Alexander Hamilton: In Their Own Words. Both are available at Amazon.com.  Bill’s website is www.William-G-Chrystal.com.