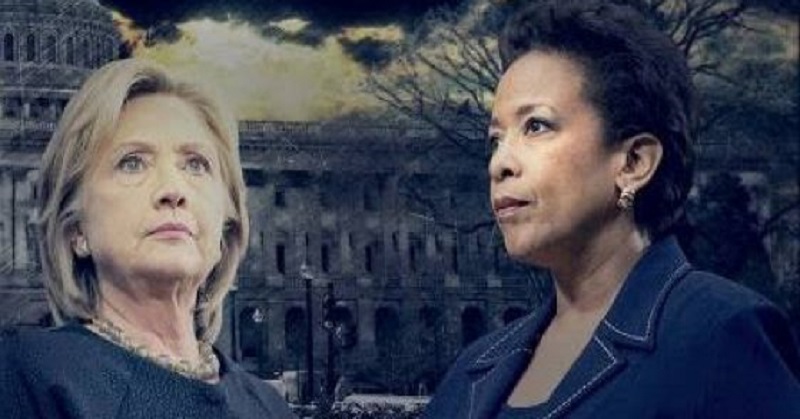 It’s no secret that the Justice Department is politicized and works at the behest of the president, not the American people.

Any appearance of its impartiality was lost after after Loretta Lynch’s clandestine meeting with former President Bill Clinton, just days before FBI Director James Comey announced that he that would not recommend charges against the former Secretary of State.

The DOJ is working to help the Democrats and cover up their dirty messes, especially Hillary Clinton.

Judicial Watch managed to secure over 44 previously-unreleased Hillary Clinton email exchanges from the State Department that Clinton failed to include among the 30,000 private messages she turned over to the government last year.

They reveal the former secretary of state’s blatant “pay to play” organized criminal scheme, where payers get special care.

Included in the new document production is a 2009 email in which Band directs Abedin and Mills to put Lebanese-Nigerian billionaire and Clinton Foundation donor Gilbert Chagoury in touch with the State Department’s “substance person” on Lebanon. Band notes that Chagoury is “key guy there [Lebanon] and to us,” and insists that Abedin call Amb. Jeffrey Feltman to connect him to Chagoury.

Chagoury is a close friend of former President Bill Clinton and a top donor to the Clinton Foundation. He has appeared near the top of the Foundation’s donor list as a $1 million to $5 million contributor, according to foundation documents. He also pledged $1 billion to the Clinton Global Initiative. According to a 2010 investigation by PBS Frontline, Chagoury was convicted in 2000 in Switzerland for laundering money from Nigeria, but agreed to a plea deal and repaid $66 million to the Nigerian government.

The FBI petitioned the DOJ earlier this year to open a a public integrity investigation into the Clinton Foundation, but Attorney General Loretta Lynch declined the request.

So the FBI thought it had enough evidence on the Clinton Foundation to move forward, but the Justice Dept. said no? https://t.co/YxUXjQHfR5

CNN reported on the DOJ’s decision to stonewall the FBI. But the network then revised its report, as VICE columnist Michael Tracey pointed out, claiming the Justice Department declined because it had already investigated the Clinton Foundation and found nothing.

Uh, was this previously known? Kind of a big deal… https://t.co/ugHIQ0gJhv pic.twitter.com/mScVqmHQl8

Why doesn't CNN elaborate on this? When exactly was the FBI petition made? During the primaries? Who exactly "declined" the probe request?

Why doesn't CNN elaborate on this? When exactly was the FBI petition made? During the primaries? Who exactly "declined" the probe request?

CNN has dramatically revised the wording of this paragraph (without notation) since I first tweeted a screenshot pic.twitter.com/7RsUMtGjKO

Another day, another raft of Hillary felonies swept under the rug– a rug big enough to cover the biggest dead elephants.

The mainstream media is a giant liberal cesspool willing to do and say anything to make sure their Democrat candidate gets elected.

With people like Lynch in control, there is no chance for anything but lawlessness.

If the FBI wants to remain a non-partisan organization, it needs to reveal its findings to the public.

So what if Clinton is juggling two consecutive email scandals, let four Americans die in Benghazi, or invited the father of the terrorist responsible for the worst attack in the U.S. since 9/11 to sit behind her at a campaign rally– look, Trump said something mean again.

If Clinton wins in November, we are headed down a rabbit hole of our own doing.