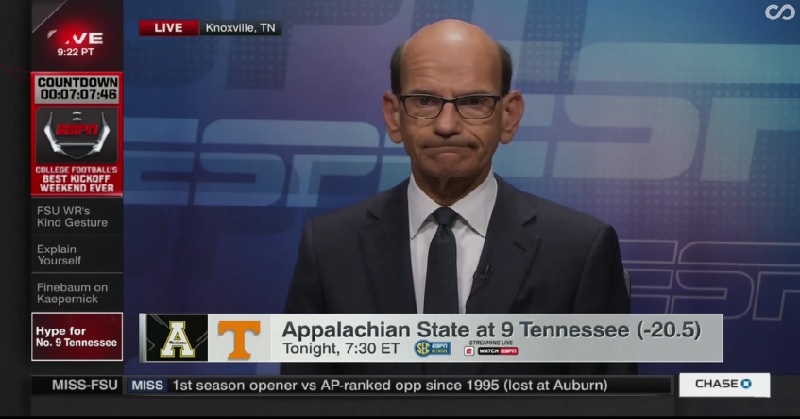 Liberals already dominate the news media, entertainment, and the music industry – do they really have to infect another facet of our daily lives?

It seems so, as even sports are fair game for politicization now. Former ESPN commentator Mike Ditka described the network as having a liberal culture, and that’s reflected in their actions (such as the firing of Curt Schilling).

Fine – they have a right to present whatever kind of ideological tilt they want, but they shouldn’t be surprised that they’re losing subscribers (ten million since 2013).

One ESPN personality, Paul Finebaum, dared to stray from the liberal narrative when it came to San Francisco 49ers quarterback Colin Kaepernick’s refusal to stand for the National Anthem. “I’m a big believer in freedom of expression at any costs,” Finebaum explained on his show last Monday. “What I don’t understand, though, is how him sitting down relates to the National Anthem.” He continued later during that episode, “this country has issues, but this country is not oppressing black people.”

And in the absurd world we live in, those are comments that warrant an apology over at ESPN. As Real Clear Politics reported:

ESPN’s Paul Finebaum apologized Thursday for questioning Colin Kaepernick, quarterback for the San Francisco 49ers, and his on-going feud with police and the national anthem earlier in the week. On Tuesday, ESPN’s Finebaum said he doesn’t understand where Kaepernick is coming from when he says black people are being oppressed in this country.

“I can spend the rest of my life trying to talk my way out of it, but I can’t,” Finebaum said. “I blew it. I simply did not have a good grasp of the situation. I know better.”

Translation: I can’t argue with insanity, so I’ll just apologize, pretend I did something wrong, and get along with my career.