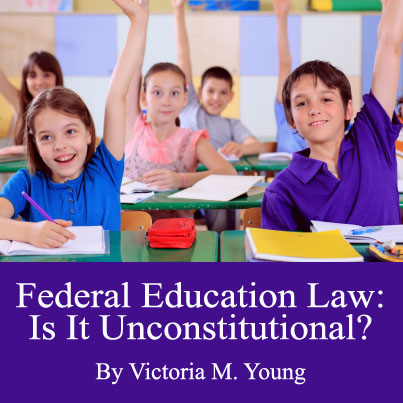 “It is not appropriate to cling to our Constitution as a guide to our legal system on some issues while ignoring others.” Jack Minzey

As a nation of taxpayers, we loudly demand accountability of our public institutions—at least in theory. We ask that someone be held accountable for student “achievement,” but, what are we really asking for? Who exactly is being held accountable for the rising costs of education with little lasting improvement to show for it? And is “accountability” for student “outcomes” a federal responsibility that can be effectively accomplished at that level?

The more familiar name for ESEA is No Child Left Behind. It is the 2001 reauthorization of ESEA that officially federalized our modern-day accountability movement which began back in the 80’s. Built upon test scores, this outcome-based philosophy spread insidiously state-by-state across the country prior to making its way into federal law. And very few people questioned the constitutionality of that law.

“Education was one of those items not given to the federal government and has forever been interpreted to mean that education is the absolute right of the states…[and it has been]…further noted that the federal government does not only have no authority over education, but that they may not use their powers or resources to influence education within the states” wrote Dr. Jack Minzey, professor emeritus at Eastern Michigan University, in an unpublished paper simply titled “Unconstitutional.”

And he went on to say, “In the case of No Child Left Behind, there is imposed an accounting system to be checked by testing.  As most educators know, when a test is a measure of students, teachers, and school systems, it behooves each system to ‘teach to the test’ in order to insure a favorable rating and additional funding. The test items then become very important, and those making the test can assure that what they want to be taught will certainly follow. In the long run, control of the testing can result in impacting attitudes, morals, thoughts, subject matter, political correctness, religion, social thought and even political orientation. Eventually, these tests will direct the nature of the curriculum. In the case of No Child Left Behind, we are already switching public school accountability from its legal base in the states to the federal government.”

Why have we remained silent? Did we simply fail to recognize and defend our public schools from an overstepping, ill-directed federal government? Or is this what the public wants? Is that why we chose to ignore the unconstitutionality of NCLB?

Now, we are twelve years beyond the inception of a national accountability system and after the longest gap in reauthorization in the history of ESEA, Congress is moving on the rewrite with a bill called the Student Success Act (H.R. 5). Why the rush now? By law, it was due to be rewritten in 2007. Perhaps it would behoove us pause a bit longer and call for answers; call for an accounting of expenses and results — call for accountability. Can your representative explain the flaws in the current law and how they are “fixed” in this bill? Will this law be any more constitutional?

Will we hear debate about who controls what our public school children will be taught? And perhaps most importantly, will we demand a return to the proper federal role in governing public schools?

The only person I have heard openly discussing the governing of our schools recently is Marc Tucker, president of the National Center on Education and the Economy, in a paper titled “Governing American Education: Why This Dry Subject May Hold the Key to Advances in American Education.”

In a nutshell, he sees the only logical way to govern schools is “to greatly strengthen the role of the state education agencies in education governance, at the expense of ‘local control,’ and of the federal government.”

Tucker’s suggestion certainly has to appeal to all those who favor “states rights” on this issue. And those of us who have been witness to and seen our children be victims of the detrimental effects of both federal education policies and ineffective local control have got to find this idea pleasing. But I must raise the caution flag — be careful what you ask for.

Serious events are about to hit the US Economy. Do you know about the 37 food items that vanish first in a crisis? CLICK to see how to get them in this video here

Take into consideration that we need an education system that is accountable first and foremost to the student—at the local level— while still providing commitment to the needs of our nation. So what I proposed in my response to Mr. Tucker, “Governing American Education: An American Answer,”  is that we look to a balance of power and control that can “be achieved and maintained by taking nothing away from the local influence but instead giving the local people the guidance they need to build the capacity within themselves and their community in order to serve the needs of their students well.” This philosophy of teaching people to help themselves is what guided the writers of the original ESEA in 1965.

What beliefs are now guiding our Congress? Constitutional law?