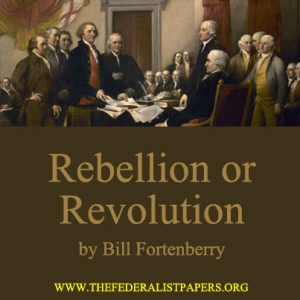 It has become rather common in our day to hear descriptions of our founding fathers as bold rebels daring to defy the authority of the British government, but is that really what happened?  Was the American Revolution an act of rebellion against England?  That has certainly become a popular theme in modern, American education, but the records of the founding era tell a different story.

In 1774, James Wilson who was to become one of only six men to sign both the Declaration of Independence and the Constitution and who would sit as one of the justices of America’s first Supreme Court, wrote a pamphlet entitled “Considerations on the Nature and Extent of the Legislative Authority of the British Parliament.”  This pamphlet should be required reading in every high school, for in it, Wilson presented a brief overview of the legal case justifying the American Revolution.  In particular, he referenced three very famous cases in British history which proved that the American colonies were not subject to the laws of Parliament.

The first case was one from 1485 in which the British court ruled that the people of Ireland were not subject to the laws of the British legislature “because they do not send knights to parliament.”  The second case was a dispute heard in 1694 regarding the question of whether the people of Jamaica were bound by the laws of Parliament, and once again, the British court ruled “That the acts of parliament or statutes of England were not in force in Jamaica.”  Wilson then made reference to a third case in which the court held “that the laws of England did not extend to Virginia.”  It was on these three cases that Wilson rested his claim that the American colonies were not bound by the dictates of Parliament.

Wilson freely admitted, however, that the colonies were still subject to the king of England even though they were not subject to the British Parliament.  This brings us to the fourth case mentioned by Wilson – the famous Calvin’s Case of 1608.  In that case, the British court ruled that:

It was the decision of the court in Calvin’s Case that inspired Sir William Blackstone to write in his Commentaries on the Laws of England that it is “a maxim in the law, that protection and subjection are reciprocal.”  In other words, if the king removes his protection from his subjects, then they cease to be his subjects and no longer owe him any allegiance.  This principle was well known and understood in the American colonies, and when King George gave his consent to the American Prohibitory Act of December 22, 1775, the colonists recognized that this removal of the king’s protection was a legal declaration of America’s independence from Great Britain.  When John Adams heard of this Act, he wrote that:

“It throws thirteen colonies out of the royal protection, levels all distinctions, and makes us independent in spite of our supplications and entreaties.  It may be fortunate that the act of independency should come from the British parliament, rather than the American congress.”

The Prohibitory Act completely destroyed the colonists’ hopes for reconciliation, for in it, the king had declared the Colonies to be free from his protection and thus, according to the law, they were made free from all allegiance to him.

What this means for us today is that the American Revolution was not an act of rebellion at all.  Rather, it consisted of a fully legal refusal to comply with laws passed by a parliament that had no authority over the colonies.  This was followed by the king’s decision to remove his protection from the colonies and declare war against them.  The Americans correctly concluded that, under British law, the actions of King George constituted a de facto declaration of American independence.  Consequently, the ensuing Revolutionary War was not a war of rebellion but rather a war of defense.  The fledgling country of America, “appealing to the Supreme Judge of the world for the rectitude of our intentions,” called upon the aid of Almighty God and valiantly defended herself against foreign invaders.