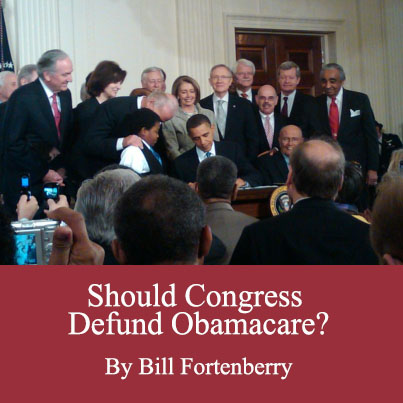 “The Senate will be more likely to be corrupt than the House of Representatives and should therefore have less to do with money matters.”

This statement by Edmund Randolph during the Constitutional Convention expresses one of the major reasons that the men of that convention chose to give the power of the purse to the House of Representatives.  They came to realize that this was one of the best ways to limit the damage that could be imposed upon our country if the Senate were to lose touch with the will of the people.  In fact, the drafters of the Constitution argued that granting this power to the House of Representatives would continue to protect the people even if the Senate, the President and the Supreme Court all turned against them.  By declaring that “All Bills for raising Revenue shall originate in the House of Representatives,” our founders gave us a sure line of defense against the corruption of our leaders.

James Madison recognized the strength of this defense in The Federalist Papers.  He wrote that if the Senate were ever to pass corrupt legislation, then:

“The House of Representatives can not only refuse, but they alone can propose the supplies requisite for the support of Government.  They, in a word, hold the purse; that powerful instrument by which we behold, in the history of the British Constitution, an infant and humble representation of the People gradually enlarging the sphere of its activity and importance, and finally reducing, as far as it seems to have wished, all the overgrown prerogatives of the other branches of the Government.  This power over the purse may, in fact, be regarded as the most complete and effectual weapon, with which any Constitution can arm the immediate Representatives of the People, for obtaining a redress of every grievance, and for carrying into effect every just and salutary measure.”

This explanation from Madison should strike a chord of hope in the heart of every American.  Our nation is currently threatened by the single most corrupt item of legislation that we have ever faced.  The looming implementation of Obamacare and all of its ramifications is a danger that must be resisted, and our founding fathers provided us with the means of doing so.  The Republicans still retain the power of the purse, and if ever there was a time to use this power, it is now.

Still, it may be asked if the use of this power is worth the risk of bringing our government to a standstill.  Fortunately, Madison addressed that question as well.  He asked, “Will not the house of representatives be as much interested as the senate in maintaining the government in its proper functions, and will they not therefore be unwilling to stake its existence or its reputation on the pliancy of the senate?”  This is the question which is even now producing uncertainty among the ranks of the Republican representatives.  Most, if not all, of them oppose the implementation of Obamacare, and they say that they would like to defund it, but they fear the ramifications of a potential government shutdown.

Madison, however, pointed out that “”it cannot be doubted, that the House … will have no small advantage in a question depending on the comparative firmness of the two Houses.”  He realized that, with the Senate being the smaller body, each individual member would feel a greater share of responsibility for shutting down of the government than would be felt by each member of the much more populous House of Representatives.  He argued that this burden, coupled with the conviction of the Representatives that they are doing the right thing, would be more than sufficient to allow them to win a stalemate on this issue.  According to Madison, the House need only stand firmly by the Constitution in order to carry the day.

“The utmost degree of firmness that can be displayed by the federal senate or president will not be more than equal to a resistance in which they will be supported by constitutional and patriotic principles.”

Nevertheless, it is certain that very few of our current representatives are aware of these reassuring words from one of our nation’s greatest founders, and many of them are even now admitting that they will cave to the pressure of the Democratic Senate.  What hope do we the people have in the face of their ignorance?  The answer to this can be found in the words of Benjamin Franklin.

When Franklin voiced his opinion on who should have the power of the purse, he said, in his characteristic frankness, that this power should belong to the closest representatives to the people because “It was a maxim that those who feel, can best judge.”  In other words, the power of the purse should be held by the House of Representatives because they are the ones who will bear the full brunt of the wrath of the people each and every election if that power is not used correctly.

This, then, is the means by which we the people can ensure that our representatives stand strong against the corruption being imposed upon us.  It is imperative that we contact our representatives and assure them that we support the defunding of Obamacare, but it is equally imperative that we inform them that failure to stand firm in this contest will be met with opposition at the ballot box.  It is also important that we back up our resolve with a show of numbers, and I encourage everyone who opposes the tyranny that threatens our land to sign the petition hosted by Senator Ted Cruz at www.dontfundobamacare.com.  Let’s prove Franklin’s maxim true and see if we can awaken some small sense of feeling within our representatives in order to help them judge correctly.

Do you agree or disagree with the authors assertions and conclusions? Comment below…