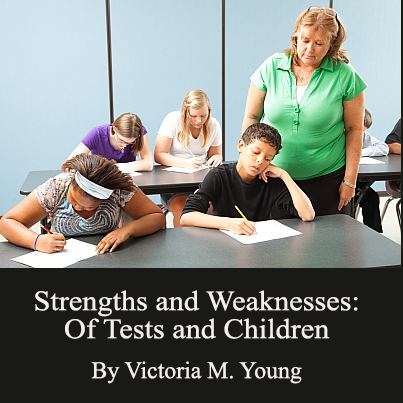 Do you know the educational strengths and weaknesses of your child and the tests they take?

All tests used to be given by classroom teachers. He or she would grade them by hand — first noting the child’s name at the top then proceeding to check each question. In the process, the teacher got to know the strengths and weaknesses of the student.

Recently, two polls of public opinion were released addressed testing — an AP (Associated Press) poll on “Parent’s Attitudes on the Quality of Education in the United States” and the 45th annual PDK (Phi Delta Kappan)/Gallup poll titled “Which way do we go?” The two surveys came to different conclusions about how the public views the use of standardized tests. But rather than argue about which is right, we might be wise to consider the findings of both polls, review the strengths and weaknesses of the tests themselves, and then decide which way we want to go.

This report also noted that these parents favored using a balanced approach to evaluating and paying teachers that weighed heavily on standardized test scores. But when it came to evaluating the quality of their own child’s teachers, these parents put emphasis on the personal qualities of being passionate and caring. They also favored “local control of the test content and use of test scores for a variety of purposes” with 93 percent of them thinking they should be used “to identify areas where students need extra help.”

Now looking to the Gallup poll; they found that fewer than 25 percent of Americans believe that the increased testing we have done over the last decade has helped the performance of their local public schools. A majority of the public “reject using student scores from standardized tests to evaluate teachers.”

The different findings of these polls are being chalked up to the way the questions were asked which is always a valid concern on surveys. But what if it has more to do with what the public knows and doesn’t know about the tests themselves? What if we are actually looking at a gap in understanding between those that have been through the trenches of the public education system (the general public) and those who are new to the experience (the current parents)? So what should we know about standardized tests?

As pointed out by W. James Popham in “Uses and Misuses of Standardized Achievement Tests,” “tests can sometimes hit the wrong target.” What these tests show is how a child compares to other children in their grouping — their meaning is relative to how other children perform, sometimes called “norm-referenced.” Many will argue that newer tests are “criterion-referenced” (compared to a “standard” rather than to other students) but this has never made sense to me because when the “cut-score” of “achievement” is set, people decide how “high the bar is” based on how the initial student guinea pigs do on the tests — that’s no better than “normed” in my opinion. But here is what Popham noted back in 2001 before the development of “the next generation of tests” that promises to be better.

Popham goes on to clarify that poor test scores do not definitively point to “instructional ineffective” schools but more correctly points to either students “from homes that fail to supply the academic support so often reflected in high test scores” or poor teaching. Either way, the interpretation should be that these schools need “supplemental resources” to address the teaching and learning needs of the students — a focused investment which is particularly wise when resources are limited.

According to Popham, the inappropriate uses of standardized achievement tests include 1) evaluating schools because “both socioeconomic status and inherited academic aptitudes [individual abilities] reflect what children bring to school, not what they learn there,” 2) evaluating teachers because of “shifting ability-levels of a teacher’s students” from year to year, 3) promoting or grading students because these tests are only a limited “sample” of knowledge and skills not an “end of course test,” and 4) making classroom instructional decisions because of the limited scope of the tests. If this limited information is used to shape instruction, it may result in the instruction being “off-target.”

Off-target? That statement, made in 2001, clearly predicted what happened during the No Child Left Behind era that focused policy and practices on “fixing schools” by using standardized test scores to guide us. These tests, no matter what they promise, are limited in their usefulness by the number of questions that can be asked to pinpoint a student’s understanding of a learning objective (standard) — it is a known weakness.

Parents and the public in general may not understand the strengths and weaknesses of standardized achievement tests but they do understand that it is at the local level, only at this level — in the classroom — where the strengths and weaknesses of their own children can most accurately be assessed by teachers. Both polls indicate that it is school people — the teachers and principals — that are the most important determinates of school quality. In the AP poll, 82 percent of parents rank their child’s teacher as good or excellent while in the PDK/Gallup, 70 percent of the general public indicates they trust teachers and 65 percent trust the principals.

We trust teachers to do their jobs, but, not to assess their own students? Standardized achievement tests are not written locally. Only two companies in the nation are writing them for the Common Core. And the promise remains the same as it was two decades ago; “these tests will be used to improve instruction.” They shouldn’t be! This theory narrowed and deadened instruction!

In the study “Beyond Test Scores: Leading Indicators for Education,” the Annenberg Institute for School Reform looked at districts that were leading the way in “data-informed decision making.” The focus was not on using standardized test scores which too often lag as indicators. Instead, they were looking at a way “to understand when (and whether) progress is being made before the results show up in indicators like student test scores.”

A central office administrator was quoted as saying, “One of the fundamental flaws is people never figure out where they’re going. And when they’re building data systems, all they’re trying to do is keep track of all the stuff that they’re doing. And so if I were to give some advice to anybody, it’s; what’s your target? And I see so many data systems that are just that – data systems – and that means a systematic gathering of something. For what?”

Thus far under the dictates of No Child Left Behind, this is what we have done — gathered scores of data.

Now, which way do we go as a nation? With testing, the time is right to go back to the 1994 levels of standardized achievement tests which were given in 4th, 8th, and 12th grades. This would be adequate for assessing our progress as a school district, a state, and as a nation.

Which way do you go as a school? To move in the direction of what’s in the best interest of the students, their own teachers must be well-versed in writing assessments of their own classroom curriculums to test whether or not each individual has mastered what has been set for them as Student Learning Objectives (SLO – the teachers academic goals based on guidelines). This is a real and relevant target and how it used to be done.

What is most important; a standardized test score or knowing what the student has learned so we can nurture their strengths and minimize the effect of their weaknesses?