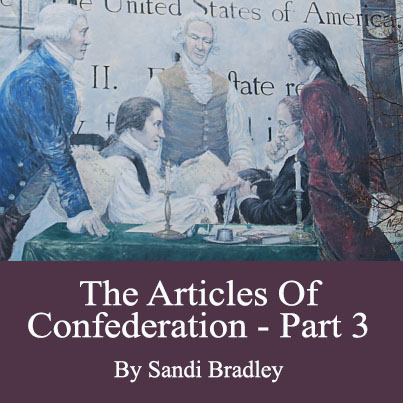 e preamble to the Articles of Confederation, along with the first three articles, was short and so easily included into a single essay. Article 4 is longer and needs its own. This section of the Articles bears some striking similarities to the Constitution along with some important differences.

“V. The better to secure and perpetuate mutual friendship and intercourse among the people of the different States in this Union, the free inhabitants of each of these States, paupers, vagabonds, and fugitives from justice excepted, shall be entitled to all privileges and immunities of free citizens in the several States; and the people of each State shall free ingress and regress to and from any other State, and shall enjoy therein all the privileges of trade and commerce, subject to the same duties, impositions, and restrictions as the inhabitants thereof respectively, provided that such restrictions shall not extend so far as to prevent the removal of property imported into any State, to any other State, of which the owner is an inhabitant; provided also that no imposition, duties or restriction shall be laid by any State, on the property of the United States, or either of them.

“If any person guilty of, or charged with, treason, felony, or other high misdemeanor in any State, shall flee from justice, and be found in any of the United States, he shall, upon demand of the Governor or executive power of the State from which he fled, be delivered up and removed to the State having jurisdiction of his offense.

“Full faith and credit shall be given in each of these States to the records, acts, and judicial proceedings of the courts and magistrates of every other State.”

We noted in Article 3 that the states were referred to as a group. In Article 4 they are spoken of as a nation. It appears that this section tried to create a more national feeling for the 13 states. It begins with a promise that the rights of citizens of one state shall be respected by the other states. This is similar to Article 4, Section 2 of the Constitution which begins, “The Citizens of each State shall be entitled to all Privileges and Immunities of Citizens in the several States.” One important difference between our first and second constitutions is shown in the second part of the first paragraph. The Articles of Confederation allowed the states to place import and export duties on each other so that goods being traded within the United States were taxed when transferred from one state to another. Naturally this led to problems which contributed to the need for a Constitutional Convention.

However besides this issue with trade Article 4 does include some good protections for the people. The citizens of the United States are secured the ability to travel throughout the nation, no papers state to state. A person who lives in one state and moves to another would be considered a citizen of that state without any naturalization process. They would have all the rights of their new state even though it was not their native soil. This in effect made the 13 sovereign states one nation. New residents moving from other states would not be treated as though they were foreigners. They were Americans.

An exception to this free movement was made for those escaping punishment for their crimes. Article 4 promises that any person charged or convicted of a crime in one state cannot seek asylum in another. There would be no sanctuary states. This too served to create a feeling that the 13 former colonies were now one nation. And again the Constitution written a decade later would echo Article 4 in its Article 4, Section 2. “A Person charged in any State with Treason, Felony, or other Crime, who shall flee from Justice, and be found in another State, shall on demand of the executive Authority of the State from which he fled, be delivered up, to be removed to the State having Jurisdiction of the Crime.”

The final paragraph of Article 4 also makes an appearance in the Constitution is Article 4, Section 1, almost word for word. “Full Faith and Credit shall be given in each State to the public Acts, Records, and judicial Proceedings of every other State. And the Congress may by general Laws prescribe the Manner in which such Acts, Records and Proceedings shall be proved, and the Effect thereof.”

In the fourth of the Articles of Confederation we see many similarities between it and the later Constitution. James Madison pointed this out in the Federalist Papers, that entire sections of the Articles had been copied into the new Constitution. But there are also differences here which made one more workable that the other. When faced with a mess, the Founders did not simply ignore what they did not like. They fixed it legally. Since that second Constitution was written it has been fixed 27 times, though with mixed results. But the lesson here from the Founders is not to ignore the law but to repair it.

What say we today?