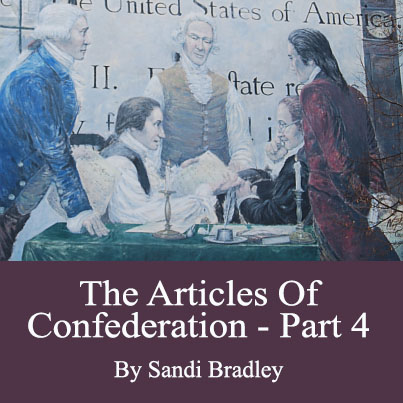 Last week we looked at Article 4 of the Articles of Confederation, comparing it to the Constitution. We found some similarities between the two along with some differences. We will do the same with the next article.

“V. For the most convenient management of the general interests of the United States, delegates shall be annually appointed in such manner as the legislatures of each State shall direct, to meet in Congress on the first Monday in November, in every year, with a power reserved to each State to recall its delegates, or any of them, at any time within the year, and to send others in their stead for the remainder of the year.

“No State shall be represented in Congress by less than two, nor more than seven members; and no person shall be capable of being a delegate for more than three years in any term of six years; nor shall any person, being a delegate, be capable of holding any office under the United States, for which he, or another for his benefit, receives any salary, fees or emolument of any kind.

“Each State shall maintain its own delegates in a meeting of the States, and while they act as members of the committee of the States.

“In determining questions in the United States in Congress assembled, each State shall have one vote.

“Freedom of speech and debate in Congress shall not be impeached or questioned in any court or place out of Congress, and the members of Congress shall be protected in their persons from arrests or imprisonments, during the time of their going to and from, and attendence on Congress, except for treason, felony, or breach of the peace.”

Article 5 deals with the selection of the member of the Continental Congress, term of service, their compensation, and a certain protection. The first section is similar to Article 1, Section 3 which has the states selecting their Senators. This was changed to popular election in 1913 by the 17th Amendment. By having the member of Congress, or Senators, selected by their respective states those bodies had the power to check the national government. If a law was proposed in Congress which the states did not like, which threatened their authority, the states could instruct their representatives to vote against it, and if they did not recall and replace them. One issue here is that the people were not represented in the Continental Congress except indirectly. This was fixed in the Constitution by having the House of Representatives directly elected by the people. Today it seems we went from the people having no representation to the states having none.

Under the Articles of Confederation states could decide the number of representatives they chose to send to Congress though a minimum and a maximum were set. Since each state was given one vote regardless of size, why did they place limits on the number of representatives? A state with two and a state with seven still had the same number of votes. But one difference here was in representation of the state. States which sent more, which could afford to send more since the states paid for their own representatives, would have more voices in Congress. This could help a state present or promote laws which it thought were warranted for the nation.

But more voices did not mean more power. No matter how many men stood up to represent a particular state, when it came time to vote they could cast but one. This is considered one of the flaws of the Articles for it created unequal representation of the people because small states had an equal say with large states. Some supported this saying that each state should have an equal say in their government while others criticized it for giving a disproportionate power to the smaller states. This can be demonstrated with the census data from 1800, the earliest year available. In 1800 the small state of Rhode Island could boast a population of 69,122 people while the largest state, Virginia, had a population of 886,149, 13 times the size. This meant that 69,000 people had an equal say with almost 900,000. This issue was also fixed in the Constitution with representation in the House being based on size.

The final paragraph of Article 5 is similar to Article 1, Section 6 of the Constitution. This section was intended to protect the members of Congress from being arrested when they were heading to Congress to cast their vote. From the Constitution:

“They shall in all Cases, except Treason, Felony and Breach of the Peace, be privileged from Arrest during their Attendance at the Session of their respective Houses, and in going to and returning from the same; and for any Speech or Debate in either House, they shall not be questioned in any other Place.”

Another similarity between the two documents is in the ban on members of Congress from holding another office for which they are paid. In Article 1, Section 6 the Constitution says:

“No Senator or Representative shall, during the Time for which he was elected, be appointed to any civil Office under the Authority of the United States which shall have been created, or the Emoluments whereof shall have been increased during such time; and no Person holding any Office under the United States, shall be a Member of either House during his Continuance in Office.”

There are many similarities between Article 5 of the Articles of Confederation and Article 1 of the Constitution, but there are also some important differences. One already mentioned is the number of votes in Congress. There are two other differences we should note. The first is the absence of requirements for being a member of Congress. The Constitution includes both a minimum age and the number of years the person must have been a citizen of the United States. The Articles contain no such standards.

There is also something in the Articles which does not appear Article 1 of the Constitution, term limits. A member of the Continental Congress could only serve three out of every six years while a member of Congress today can serve for decades. Does this indicate that the Founders intended congressional service to not be a career? If so why did they not include such a requirement in the Constitution? Would we be better off if they did?