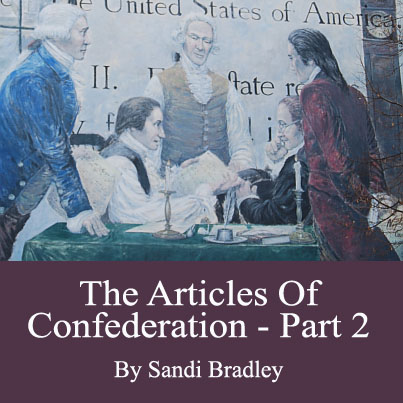 Just like the Declaration of Independence, the Constitution, and even the Second Amendment, the Articles of Confederation begins with an opening statement expressing the document’s purpose.

“To all to whom these Presents shall come, we the undersigned Delegates of the States affixed to our Names send greeting.

This opening is certainly not as eloquent as those of the Declaration or Constitution but merely a simple statement about the Articles. What follows will live up to the style of the beginning. This is a simple and straightforward document. One interesting phrase in the opening is “perpetual Union.” Despite the ongoing debate on the rights of states to secede it does not appear from this phrase that the Founders either expected it or wanted it to happen.

“I. The Stile of this Confederacy shall be ‘The United States of America’.”

The first order of business for the Articles of Confederation was to affirm the name for the new nation which had already been presented in the Declaration of Independence. Its next step is to limit the government of that nation.

“II. Each state retains its sovereignty, freedom, and independence, and every power, jurisdiction, and right, which is not by this Confederation expressly delegated to the United States, in Congress assembled.”

Remember that the United States was at that time in the midst of a war with Great Britain who had for more than a decade prior interfered with the rights of the colonists to manage their own affairs. The Continental Congress had no desire to replace one overbearing government with another so they spelled out that only the powers expressly stated as belonging to the national government could be exercised by that body. All else belonged to the states. This is akin to the 10th Amendment to the Constitution.

“III. The said States hereby severally enter into a firm league of friendship with each other, for their common defense, the security of their liberties, and their mutual and general welfare, binding themselves to assist each other, against all force offered to, or attacks made upon them, or any of them, on account of religion, sovereignty, trade, or any other pretense whatever.” Article 3 states that one of the purposes of the perpetual union is for the mutual defense of those sovereign states. It also speaks of the states as a group rather than the nation as a single entity. The next article does not. It speaks of the nation. These different ways of referring to the new United States may be revealing of a conflict in identity. Today if people are asked they will identify themselves first as Americans and second by their state. This was not true in our early history. The members of the Second Continental Congress identified themselves first as citizens of their state and then as Americans. This would not change until after the Civil War.

Whether their loyalty was to their state first and then their country or the other way, they were loyal. Many of the Founders put their own interests after those of their nation risking the very lives and fortunes that they pledged in the Declaration. Compared with what they had to face our problems seems so much smaller than what faced these men who had to frame a new government while fighting off the old one.

Can we not rise to meet our problems as they did theirs?