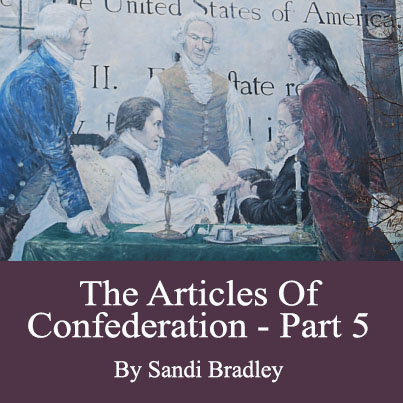 The next section of the Articles of Confederation, Article 6, deals with powers which were reserved for the national or central government. These begin with the restriction that Congress is the only body with the authority to make treaties and wage war. One exception to the latter was in case of invasion or imminent threat. If that were to happen the states were allowed to take action without first seeking the permission of Congress. This is in keeping with the ideas of the Founders that self-defense is an inalienable right.

Other bans were included. The states could not form alliances with each other. They were also not permitted to lay different import duties apart from the national government. Both of these were to prevent divisions from developing over trade. A further ban was placed on awarding titles of nobility.

In addition to those things the states were forbidden to do is one they were required to do, maintain a militia and properly equipping it. The Founders had a fear of standing armies. In Europe’s past they were sometimes used to oppress the people. By maintaining a proper militia the need for a standing army was negated without leaving the country defenseless.

“VI. No State, without the consent of the United States in Congress assembled, shall send any embassy to, or receive any embassy from, or enter into any conference, agreement, alliance or treaty with any King, Prince or State; nor shall any person holding any office of profit or trust under the United States, or any of them, accept any present, emolument, office or title of any kind whatever from any King, Prince or foreign State; nor shall the United States in Congress assembled, or any of them, grant any title of nobility.

“No two or more States shall enter into any treaty, confederation or alliance whatever between them, without the consent of the United States in Congress assembled, specifying accurately the purposes for which the same is to be entered into, and how long it shall continue.

“No State shall lay any imposts or duties, which may interfere with any stipulations in treaties, entered into by the United States in Congress assembled, with any King, Prince or State, in pursuance of any treaties already proposed by Congress, to the courts of France and Spain.

“No vessel of war shall be kept up in time of peace by any State, except such number only, as shall be deemed necessary by the United States in Congress assembled, for the defense of such State, or its trade; nor shall any body of forces be kept up by any State in time of peace, except such number only, as in the judgement of the United States in Congress assembled, shall be deemed requisite to garrison the forts necessary for the defense of such State; but every State shall always keep up a well-regulated and disciplined militia, sufficiently armed and accoutered, and shall provide and constantly have ready for use, in public stores, a due number of filed pieces and tents, and a proper quantity of arms, ammunition and camp equipage.

This section of the Articles, while long, is very simple and very much like Article 1, Section 10 of the Constitution. Since the states were joining together into a perpetual union some things needed to be handled centrally. It would create great difficulties if a nation wishing to negotiate a peace treaty or trade agreement would have to go to each of the 13 states to seek agreement, and it would cause even more difficulty if one or a group of states negotiated a peace or declared war when the others had not. While the 13 states were to be sovereign within their own borders, to the rest of the world they were a single nation.

There is something left out of Article 6 which the Founders decided to include in the Constitution. That had to do with coining money. Under the Articles each state printed and minted its own currency. We were one nation to the rest of the world, we were one nation in the ability of our citizens to travel the nation, but we were 13 countries in our currency. Naturally this led to problems with some state’s currency being having higher value than others. It also made trade between the states more difficult.

The Founders, when they wrote the Constitution did not begin from scratch. There were things in the Articles which worked, and these the Framers of the Constitution copied, sometimes word for word. But there were things they had learned in the intervening decade between the two documents. The Founders learned from their mistakes and tried to make the next constitution better than the first. Have we learned from our mistakes or are we going to keep making the same ones?