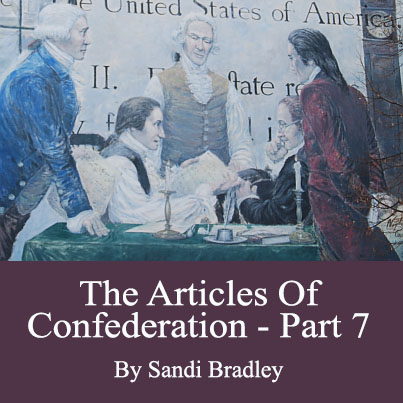 The next two sections of the Articles of Confederation are on making war and something else. Article 7 deals with officers. The states have the authority to choose their military officers so long as they are colonel and below.

“VII. When land forces are raised by any State for the common defense, all officers of or under the rank of colonel, shall be appointed by the legislature of each State respectively, by whom such forces shall be raised, or in such manner as such State shall direct, and all vacancies shall be filled up by the State which first made the appointment.”

In Article 8 the cost of war was laid on Congress though not the means. As it was common defense Congress would technically be the responsible party, but the funds would come from the states. This is because the Continental Congress did not have the power to tax. Instead it relied on the states to do so for it. In this case the war debts would be apportioned to the states based on the value of the land in the state. In other words, Congress would decide how much each state owed and try to collect it.

“VIII. All charges of war, and all other expenses that shall be incurred for the common defense or general welfare, and allowed by the United States in Congress assembled, shall be defrayed out of a common treasury, which shall be supplied by the several States in proportion to the value of all land within each State, granted or surveyed for any person, as such land and the buildings and improvements thereon shall be estimated according to such mode as the United States in Congress assembled, shall from time to time direct and appoint.

“The taxes for paying that proportion shall be laid and levied by the authority and direction of the legislatures of the several States within the time agreed upon by the United States in Congress assembled.”

Article 12 is included with 8 because it also dealt with taxes and revenue. Like Article 8 it placed on Congress the burden to pay certain debts. It reaffirmed that the war debt incurred before the Articles of Confederation were written were still assumed by that body.

“XII. All bills of credit emitted, monies borrowed, and debts contracted by, or under the authority of Congress, before the assembling of the United States, in pursuance of the present confederation, shall be deemed and considered as a charge against the United States, for payment and satisfaction whereof the said United States, and the public faith are hereby solemnly pledged.”

The Articles of Confederation placed on Congress the duty to pay certain expenses but without the means to do so. Congress depended on the states for money. It is perhaps this inability to tax which has some looking favorable upon the Articles of Confederation, but this is in fact one of its flaws. No ability to tax made Congress unable to pay for its obligations since the states did not always follow through with the levied amount.

Without its own source of revenue the Continental Congress found itself without the funds to pay its debts. This even affected the United States’ ability to wage war.  George Washington kept his secretaries busy during the Revolution writing letters begging for money and supplies. Several Founders and Patriots, including Washington’s brother in law, Fielding Lewis, bankrupted themselves lending money which the government could not repay or in buying needed supplies with their own pockets. Congress had to send John Adams to Europe to borrow what it could not raise. As much as taxes are disliked they are necessary for government to operate.

But at what point does taxation go from necessary unpleasantness to theft? Comment below…