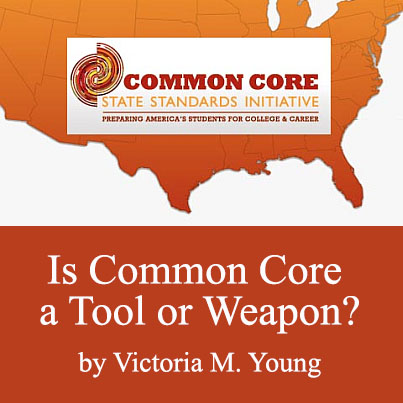 Will Common Core Standards be a good thing for America? Maybe, but only if we understand the proper use and potential abuse that could easily occur if we aren’t watching closely. After all, WE are the ultimate check-and-balance. WE had better understand the circles of influence because influence is power that can turn to control.

Many think as Bill Gates expressed in the September 23, 2007 Parade Magazine, “It’s incredible that we have no national standards.” And there is some soundness to the idea, but, standards-based “reform” has only been proven NOT to work in America with No Child Left Behind being the most current example.

So, is Common Core a “national” standard? Not yet, but only because some states said “no thank you,” at this time.

So the argument goes:

Common Core is a state initiative. That “fact” you will have to decide for yourself. Is it state-led or Gates-led?

Standards are not curriculum. True. Standards are a teaching guide to help ensure all children are taught what we judge to be important. But as the sequence of events goes; we develop standards, we develop tests to match those standards, and then what we teach and how (the curriculum) is aligned with the tests. Standards will direct curriculum so that makes it important to see how promoters of Common Core see the role of the federal government as compared to former lawmakers.

Back in 1965, Congress was influential in putting federal education law into place and clearly expressing within it the federal role as investment in children from low-income families whose needs were not being addressed by localities. And the testing of these children was to ensure the extra funds were serving the children’s learning needs. This law carefully explained the federal limits. Section 604 of The Elementary and Secondary Education Act read:

Nothing contained in this Act shall be construed to authorize any department, agency, officer, or employee of the United States to exercise any direction, supervision, or control over the curriculum, program of instruction, administration, or personnel of any educational institution or school system, or over the selection of library resources, textbooks, or other print or published instructional materials by any educational institution or school system.”

Things have changed. By 2006, three circles of influence were explained through the Editorial Projects in Education Research Center in a paper titled – INFLUENCE (see chart page 21). Those organizations most influential were the United States Congress, the U.S. Department of Education, and the Bill & Melinda Gates Foundation. In this same report, Mr. Gates was declared the most influential person in education reform — ahead of President George W. Bush.

Since then, the Gates’ tentacles of influence expanded to include not only the National Governors Association and Achieve (a Gate’s supported “standards-setting” service) but also the Council of Chief State School Officers as one of its many corporate partners.

“Federal Role. The parties support a state-led effort and not a federal effort to develop a common core of state standards; there is, however, an appropriate federal role in supporting this state-led effort. In particular, the federal government can provide key financial support for this effort in developing a common core of state standards and in moving toward common assessments, such as through the Race to the Top Fund authorized in the American Recovery and Reinvestment Act of 2009. Further, the federal government can incentivize this effort through a range of tiered incentives, such as providing states with greater flexibility in the use of existing federal funds, supporting a revised state accountability structure, and offering financial support for states to effectively implement the standards. Additionally, the federal government can provide additional long-term financial support for the development of common assessments, teacher and principal professional development, other related common core standards supports, and a research agenda that can help continually improve the common core over time. Finally, the federal government can revise and align existing federal education laws with the lessons learned from states’ international benchmarking efforts and from federal research.”

“They” redefined the federal role for us, told the federal government what to do, how to spend our federal recovery dollars, and what “they” said was done by the Department of Education; under the influence?

We should probably know who “they” really is. The original 135 member Common Core development group was heavily stacked with people associated with Gates-funded organizations and many members with connections that read like a list of Wall Street financial corporations in addition to global research & development, and technology companies already heavily invested in our defense, security, and energy information.

The two “consortiums” in the country that will offer the “Next Generation Tests” both have associations with Gates and received federal Recovery Act funds. “They” will be directing the show and we are told that “they” are the states; this is “state-led.”

Outside the circle of influence, there is talk about another way to use standards. We can probably all relate to this. A lesson is taught, quizzes are given, an opportunity to self-correct or re-learn is provided and, eventually, a larger test is given —and the student is given a grade. Add periodic standardized tests (4th, 8th, and 12th grade) where the only “test-prep” is reminding kids to make sure they do their best. This is honest testing with honest results and you have an “assessment system” without high costs and with less danger of inappropriate use of data. Back when we were kids, standardized tests were used properly — as a snap-shot for systemic guidance and some comparisons. We can adopt standards without adopting the testing and centralized data collection that is currently planned for us.

With the Department of Education under Gates wing, and federal education law (No Child Left Behind – NCLB) due to be re-written, we should pay attention to the “new deal” CCSSO and NGA have for the last circle of influence — Congress. Their plan for NCLB is to use our federal dollars to improve data systems, assessments, and consolidation of “reporting to a single office in the U.S. Department of Education that manages all data requests and collections…”(with good intentions, of course). Plus, “they” suggest some new power be given to the Secretary to approve “new policy models” in our states in the name of “innovation.”

Are we setting up a system that is vulnerable to the further corruption of power?

The good and bad of it — Common Core can be one powerful tool for improvement of instruction, or, one ultra-powerful weapon to be used at will.

The last instrument of influence over public education that we the people have, as a nation, is No Child Left Behind through Congress – what is the will of the People?

Get Victoria’s newest book The Crucial Voice of the People, Past and Present at Amazon