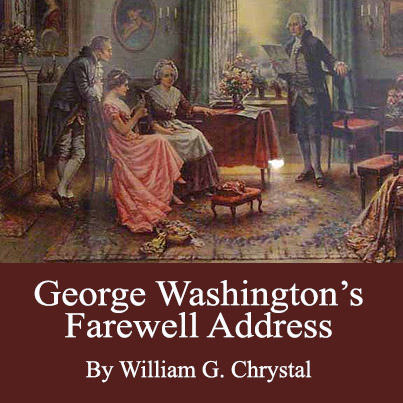 President George Washington’s Farewell Address ranks high among America’s “sacred texts.”  Intended as a letter from the outgoing President of the United States to the American people, the Farewell Address is repeatedly found among lists of the most important writings in American history.

However, it is not widely known that the Farewell Address was written almost entirely by Alexander Hamilton (in Wikipedia, Hamilton is given credit for “helping” Washington).  Hamilton was a private citizen at the time, living in New York City, when Washington asked him to draft it. The President accepted Hamilton’s version almost entirely.

This is not surprising since Hamilton had been writing papers for Washington since the Revolutionary War, when Hamilton served as General Washington’s principal aide de camp.  Hamilton knew what Washington thought, and he had a particular gift for expressing ideas in ways that appealed to Washington.  Walking the streets of Gotham with his wife after its publication, Hamilton was approached by a vendor (a Revolutionary War soldier) and asked to buy a copy of the Farewell Address.  Hamilton obliged, remarking to his wife, “He doesn’t know he asks me to buy my own words.”

The Farewell Address is filled with timeless insights. In it, the President urges unity of government, something that “is a main pillar in the edifice of your real independence, the support of your tranquility at home, your peace abroad; of your safety; of your prosperity; of that very liberty which you so highly prize.”  There were real threats to such unity.  Political parties ranked high.  Some believed they were “useful checks upon the administration of the government and serve to keep alive the spirit of liberty.”  True to a degree, perhaps, but “The alternate domination of one faction over another, sharpened by the spirit of revenge, natural to party dissension … is itself a frightful despotism,” the Address concluded.

Encouraging political prosperity was the goal of the Farewell Address, and the author saw no better way than by encouraging religion and morality.  “Of all the dispositions and habits which lead to political prosperity, religion and morality are indispensable supports,” the Address concludes. “In vain would that man claim the tribute of patriotism, who should labor to subvert these great pillars of human happiness, these firmest props of the duties of men and citizens.  The mere politician, equally with the pious man, ought to respect and to cherish them.”

Not only does the Address encourage schools, “institutions for the general diffusion of knowledge.” It also urges citizens to “cherish public credit,” saying, “One method of preserving it is to use it as sparingly as possible, avoiding occasions of expense by cultivating peace, but remembering also that timely disbursements to prepare for danger frequently prevent much greater disbursements to repel it ….”

“Observe good faith and justice towards all nations,” the Address continues. “… In the execution of such a plan, nothing is more essential than that permanent, inveterate antipathies against particular nations, and passionate attachments for others, should be excluded;” it suggested; “and that, in place of them, just and amicable feelings towards all should be cultivated. The nation which indulges towards another a habitual hatred or a habitual fondness is in some degree a slave. It is a slave to its animosity or to its affection, either of which is sufficient to lead it astray from its duty and its interest.”

The Address devotes considerable space to the idea of “foreign influence.” Hamilton, when writing, was probably thinking a good deal about dangers posed by too close an attachment to France. But as an astute political philosopher, he saw permanent danger in any prejudiced views.  “… a passionate attachment of one nation for another produces a variety of evils. Sympathy for the favorite nation, facilitating the illusion of an imaginary common interest in cases where no real common interest exists, and infusing into one the enmities of the other, betrays the former into a participation in the quarrels and wars of the latter without adequate inducement or justification,” the Address reads. “It leads also to concessions to the favorite nation of privileges denied to others which is apt doubly to injure the nation making the concessions; by unnecessarily parting with what ought to have been retained, and by exciting jealousy, ill-will, and disposition to retaliate, in the parties from whom equal privileges are withheld,” the Address insists. “And it gives to ambitious, corrupted, or deluded citizens (who devote themselves to the favorite nation) facility to betray or sacrifice the interests of their own country, without odium, sometimes even with popularity, gilding, with the appearances of a virtuous sense of obligation, a commendable deference for public opinion, or a laudable zeal for public good, the base or foolish compliances of ambition, corruption, or infatuation.”

In conclusion, the Farewell Address encourages “Harmony, liberal intercourse with all nations …” As one looks at the history of the United States since the Address was written, it is apparent that its advice was often ignored.  And when one views the vast sums of money which influence the political process today as a “foreign” influence, one is reminded of John Adams’ Inaugural Address: “If an election is to be determined by a majority of a single vote, and that can be procured by a party through artifice or corruption, the government may be the choice of a party for its own ends, not of the nation for the national good,” he said. “If that solitary suffrage can be obtained by foreign nations by flattery or menaces, by fraud or violence, by terror, intrigue, or venality, the government may not be the choice of the American people, but of foreign nations.”