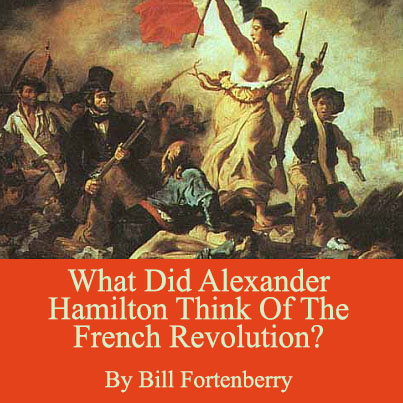 An acquaintance of mine recently returned from a trip to Europe where he had the opportunity to visit Paris on Bastille Day.  Bastille Day is the English name given to the Le quatorze juillet (14th of July) celebration of the French Revolution.

As my friend described the various festivals and parades, I was reminded of Alexander Hamilton’s assessment of the French Revolution.  Here is an excerpt from Hamilton’s lengthy condemnation of the actions of the French people:

“In reviewing the disgusting spectacle of the French revolution, it is difficult to avert the eye entirely from those features of it which betray a plan to disorganize the human mind itself, as well as to undermine the venerable pillars that support the edifice of civilized society. The attempt by the rulers of a nation to destroy all religious opinion, and to pervert a whole people to Atheism, is a phenomenon of profligacy reserved to consummate the infamy of the unprincipled reformers of France. The proofs of this terrible design are numerous and convincing.

“The animosity to the Christian system is demonstrated by the single fact of the ridiculous and impolitic establishment of the decades, with the evident object of supplanting the Christian Sabbath. The inscription by public authority on the tombs of the deceased, affirming death to be an eternal sleep, witness the desire to discredit the belief of the immortality of the soul. The open profession of Atheism in the Convention, received with acclamations; the honorable mention on its journals of a book professing to prove the nothingness of all religion; the institution of a festival to offer public worship to a courtezan decorated with the pompous title of “Goddess of Reason;” the congratulatory reception of impious children appearing in the hall of the Convention to lisp blasphemy against the King of Kings; are among the dreadful proofs of a conspiracy to establish Atheism on the ruins of Christianity—to deprive mankind of its best consolations and most animating hopes—and to make a gloomy desert of the universe.

“Latterly the indications of this plan are not so frequent as they were, but from time to time something still escapes which discovers that it is not renounced. The late address of Buonaparte to the Directory is an example. That unequalled conqueror, from whom it is painful to detract; in whom one would wish to find virtues worthy of his shining talents, prophanely unites religion (not superstition) with royalty, and the feudal system as the scourges of Europe for centuries past. The decades likewise remain the catapulta which is to batter down Christianity.

“Equal pains have been taken to deprave the morals as to extinguish the religion of the country, if indeed morality in a community can be separated from religion. It is among the singular and fantastic vagaries of the French revolution, that while the Duke of Brunswick was marching to Paris, a new law of divorce was passed; which makes it as easy for a husband to get rid of his wife, and a wife of her husband, as to discard a worn out habit. To complete the dissolution of those ties, which are the chief links of domestic and ultimately of social attachment, the Journals of the Convention record with guilty applause accusations preferred by children against the lives of their parents.

“It is not necessary to heighten the picture by sketching the horrid groupe of proscriptions and murders which have made of France a den of pillage and slaughter; blackening with eternal opprobrium the very name of man.

The pious and the moral weep over these scenes as a sepulchre destined to entomb all they revere and esteem. The politician, who loves liberty, sees them with regret as a gulph that may swallow up the liberty to which he is devoted. He knows that morality overthrown (and morality must fall with religion) the terrors of despotism can alone curb the impetuous passions of man, and confine him within the bounds of social duty.”

Alexander Hamilton was just one of the many founders who condemned the results of the French Revolution.  The French were intent on making changes to their country in order to gain more liberty and freedom for the common man, but in the process, they rejected the source of freedom by turning against the God of the Bible.  Now, in our time, many Americans are desperately seeking relief from the tyranny which has been forced upon us.  As we search for the best path back to freedom, let us not forget the example of the French.  Let us always keep God at the center of our plans so that other nations looking to our example will have no reason to condemn us as our forefathers condemned the French