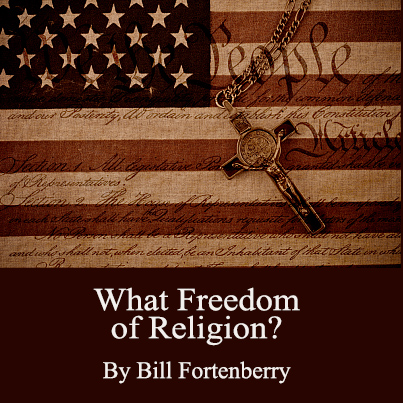 Much of the debate on the relationship between church and state has centered around the phrases “freedom of religion” and “separation of church and state.”  While these phrases have a very important history and should be studied, their applicability to American government must be understood within the confines of the First Amendment.  Unfortunately, the debate on this Amendment has largely focused on whether or not its prohibitions are limited to the US Congress.  The real key to understanding the First Amendment lies in unlocking the mystery of the phrase “an establishment of religion.”

When the founders first prohibited an establishment of religion, there was little need for them to explain what was meant by that phrase.  Most of the citizens of the new nation had lived under governments with established churches and had an instinctive knowledge of what exactly was being prohibited by the First Amendment.  Now, more than two centuries later, most Americans read this phrase with little if any comprehension of its true meaning.  To them, the Amendment’s prohibition against an established religion is a nebulous preference for a secular form of government, but this is not what the founders had in mind.

To properly understand what was prohibited by the First Amendment, it is necessary for us to discover how the founders would have understood the phrase “an establishment of religion.”  To do this, let us consider the explanation proffered by one of the men who argued strongly in favor of having an established church in America, Thomas Bradbury Chandler.  Bishop Chandler wrote that:

Here Bishop Chandler makes a very important distinction between religious establishment and religious toleration.  According to his definition the sole distinction between the two is that of monetary support from the government for a specific religion.  This distinction was addressed by James Madison in a letter to Rev. Jasper Adams in 1832.  Madison wrote:

“The simple question to be decided is whether a support of the best and purest religion, the Christian religion itself ought not so far at least as pecuniary means are involved, to be provided for by the Government rather than be left to the voluntary provisions of those who profess it.”

Madison went on to conclude that:

“the existing character, distinguished as it is by its religious features, and the lapse of time now more than 50 years since the legal support of Religion was withdrawn sufficiently prove that it does not need the support of Government, and it will scarcely be contended that Government has suffered by the exemption of Religion from its cognizance, or its pecuniary aid.”

Madison’s focus on the pecuniary provision for religion by the government supports Bishop Chandler’s definition of an established religion as one which receives monetary support from the state, but Madison also mentioned the exemption of religion from the cognizance of the government, and this seems more in line with the modern preference for a secular state.  To properly understand this statement, however, we must turn to an early 18th century author named William Warburton.  Madison actually recommended to Thomas Jefferson that some of Bishop Warburton’s books be added to the library of the University of Virginia.  One of the Bishop’s books which was not recommended was a defense of established religion entitled The Alliance Between Church and State.  In that book Bishop Warburton identified six essential characteristics of an establishment of religion.

This brings us back to the consideration of the actual wording of the First Amendment.  If the founders understood with Bishop Chandler that the choice was between establishment and toleration, then it follows that the prohibition against an establishment must be viewed as a preference for toleration to some degree or another.  And if they recognized with Bishop Warburton the six common characteristics of an established church, then it follows that the bounds of toleration would be limited only from a legal recognition of interactions which fall within those six areas.  In essence, this understanding of the First Amendment would mean that the church and the state are permitted by the Constitution to enjoy a much greater degree of mutual interaction than is currently recognized.  This explains the tremendous amount of such interactions which occurred during the terms of the first four Presidents, and it should be our goal to return to an understanding of the First Amendment which does not criminalize the actions of our own founders.