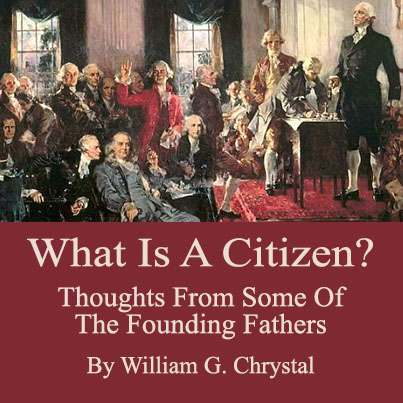 In a list of questions the Immigration and Naturalization Service makes available to people studying for American citizenship, the following question is asked:  “What is the most important right granted to U.S. citizens?”  Think about this for a moment.  The answer may surprise you:  It is, “The right to vote.”

In a time when half of the American people don’t bother to vote, one is startled to read that John Adams, in 1761, implied that one of the best reasons for literacy is that it makes people better voters, and hence, better citizens.  “Every man has in politics as well as religion a right to think and speak and act for himself,” Adams wrote.  “I must judge for myself, but how can I judge, how can any man judge, unless his mind has been opened and enlarged by reading?  A man who can read will find… rules and observations that will enlarge his range of thought and enable him the better to judge who has and who has not that integrity of heart and that compass of knowledge and understanding which form the statesman.”

Free elections are at the heart of American democracy.  In 1788, Alexander Hamilton declared to the people of New York that “the true principle of a republic is that the people should choose whom they please to govern them.”  Almost ten years later, John Adams explained the sacredness of a single vote in his 1797 inaugural address, “If an election is to be determined by a majority of a single vote, and that [vote] can be procured by a party through artifice or corruption, the government may be the choice of a party for its own ends, not of the nation for the national good.”

Not surprisingly, from the perspective of the Founding Fathers, the first quality of a good citizen then is that he or she votes.  Full enfranchisement was the reason the American colonists separated themselves from Great Britain.  Thus, a good citizen will never miss an opportunity to cast a vote.  Although it is clichéd, the idea of one person and one vote is sacred to our governing system.

When the Constitution was drafted, there was considerable discussion over who would have the right to vote.  Gouverneur Morris of Pennsylvania argued that only landowners should be given the right.  “Give the votes to people who have no property, and they will sell them to the rich who will be able to buy them.”  George Mason of Virginia and Oliver Ellsworth of Connecticut disagreed.  They thought all who pay taxes should vote.  As Ellsworth noted, “Ought not every man who pays a tax to vote for the representative who is to levy and dispose of his money?”

Though a decision was made in favor of states determining eligibility for who votes in state elections, and hence, for their members of the House of Representatives, the argument behind the debate is important.  Clearly, some of the founders were fearful of those who didn’t own property—those who presumably lacked the judgment to vote wisely.

The founders wanted informed citizens.  They believed it was essential for the health of the American Republic.  Thomas Jefferson said that “If a nation expects to be ignorant and free, in a state of civilization, it expects what never was and never will be.”

Though the framers of the Constitution debated over who should be given the right to vote, all wished that those granted it would employ it wisely and carefully.  Therefore, the second mark of a good citizen is that he or she is able to think and thus to vote wisely and carefully. They wanted an electorate that was knowledgeable about candidates and issues.  Alexander Hamilton in 1780 decried, “The people commonly act more from their feelings than from their understandings.”  John Adams thought similarly.  “Evil, in humankind,” he wrote, “lies in the lack of governance by reason over the passions.”  Thus, thinking and reasoning lie at the heart of what it means to be a good citizen in the founders’ world.

The founders also believed that citizens must be vigilant. It is not enough to be well-informed; citizens must also safeguard their liberties.  Though Hamilton and Thomas Jefferson seldom agreed on much, both would echo Jefferson’s assessment of the need for vigilance.  “All tyranny needs to gain a foothold is for people of good conscience to remain silent,” Jefferson wrote.

The most important right granted to an American citizen is the right to vote.  The founders hoped we would exercise this right carefully, knowledgably, thoughtfully and with vigilance. When you cast your vote in any election be grateful that they bequeathed to us so rich a legacy.

Click here to learn more about Bill and his work  – www.William-G-Chrystal.com