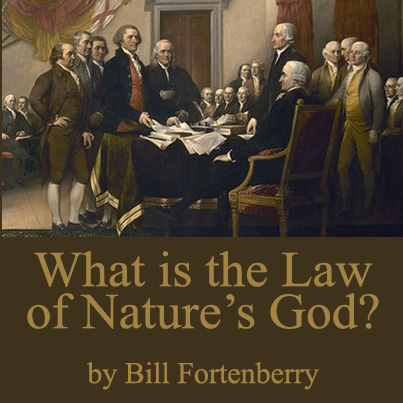 “When in the Course of human events, it becomes necessary for one people to dissolve the political bands which have connected them with another, and to assume among the powers of the earth, the separate and equal station to which the Laws of Nature and of Nature’s God entitle them, a decent respect to the opinions of mankind requires that they should declare the causes which impel them to the separation.”

These famous words form the opening paragraph of one of the most influential documents in all of human history – the American Declaration of Independence.  According to this paragraph, the American claim to independence was established upon “the Laws of Nature and of Nature’s God,” but what did Thomas Jefferson mean by this phrase?  Nearly all of the modern historians who have written about this phrase have accused Jefferson and the other signers of the Declaration of abandoning the God of the Bible and erecting a more deistic god of nature in His place.  But this accusation is entirely false.  Jefferson’s reference to the laws of nature and of nature’s God had a very specific meaning that was well understood by eighteenth century Americans.

This idea that Jefferson was referring to two separate systems of laws is supported by a statement made by John Quincy Adams in a court case in 1841.  He claimed that:

“In the Declaration of Independence the Laws of Nature are announced and appealed to as identical with the laws of nature’s God, and as the foundation of all obligatory human laws.”

The answer to that question is a resounding, Yes!  Thomas Jefferson was a student of Lord Bolingbroke.  He first began studying Bolingbroke’s writings at the age of fourteen, and he read them again at the age of twenty-three as he was preparing for a career as a lawyer.  Jefferson’s Literary Commonplace Book contains more quotations from Bolingbroke than from any other author, and I do not know of a single historian who has not given Bolingbroke the credit for Jefferson’s famous phrase regarding “the Laws of Nature and of Nature’s God.”  What these scholars keep hidden is the fact that Lord Bolingbroke provided a very specific definition for this phrase.

In a renowned letter to Alexander Pope, Lord Bolingbroke wrote the following words which were to become the basis for Jefferson’s opening paragraph of the Declaration of Independence:

“You will find that it is the modest, not the presumptuous enquirer, who makes a real, and safe progress in the discovery of divine truths.  One follows nature, and nature’s God; that is, he follows God in his works, and in his word.”

Here we find a definition from the very individual that all scholars recognize as the source of Jefferson’s phrase.  According to Lord Bolingbroke, the law of nature’s God is the Law which is found in God’s Word.  This was the definition which was intended by Jefferson, and this was the manner in which his words were understood by our forefathers.  The law of nature’s God upon which our nation was founded is nothing less than the Bible itself.