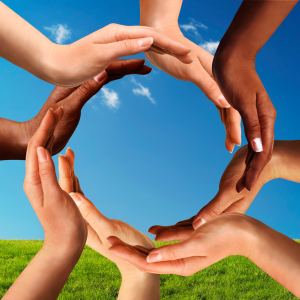 Many in today’s media, politics and Hollywood accuse people of racism— the cries of racism are everywhere and for everything, but are they founded in truth? Or, do these accusers of racism illustrate their own discriminatory feelings when they shout racist epitaphs at others because they do not wish to compete honestly in the world of ideas?

Many feel racism has been turned into a profitable business that inspires division and conflict as a means to sustain their “race” profession. Is this true or false?

Is it racist for government to place a hyphen or descriptive name by particular groups of certain origins? Is it better NOT to associate yourself with a race, gender, or color by simply asking that each of us be judged by our own merit and character—- as Americans?

Did Martin Luther King want to be a Hyphenated American, or just another American equal in liberty?

I believe we are all Americans in the public sphere. Racism and slavery are a stain upon America, but there are no stains upon the American Idea. The problem has never been with our Constitution or Declaration, but with the people themselves defining other races, creeds and colors less capable of freedom as others.

The sentiments in our Founding Documents are broad and all encompassing. They do not define people collectively, but define each person as a sovereign individual with their own character and merit.

“RACE, in the popular sense, is narrow; humanity is broad. The one is special; the other is universal. The one is transient; the other permanent. In the essential dignity of man as man, I find all necessary incentives and aspirations to a useful and noble life. Man is broad enough and high enough as a platform for you and me and all of us. The colored people of this country should advance to the high position of the Constitution of the country. The Constitution makes no distinction on account of race or color, and they should make none.”

We as nation have complicated our relationships with laws that recognize physical characteristics rather than merit and character. As a nation we have “separated” people into groups of different origins—and this I believe, is the racism. Would not the answer to our racial tensions lesson with one simple recognition that we are all Americans, equal in liberty and equal under the law?

Isn’t it more respectful to believe that any person is capable of voting with legal identification rather than announcing that millions are incapable of providing an ID for themselves to vote? Which is racism? The person who says YOU as a GROUP are NOT capable of the freedom to purchase an ID—or the person who believes you are capable and responsible enough to supply your own needs and abide in the same rule of law as others?

“As colored men, we only ask to be allowed to do with ourselves, subject only to the same great laws for the welfare of human society which apply to other men, Jews, Gentiles, Barbarian, Sythian. Let us stand upon our own legs, work with our own hands, and eat bread in the sweat of our own brows.”

Today, the segregation which could no longer been done brutally has been accomplished politically and economically by groups of politicians and activists who make careers out of political power, division, envy, and resentment. These race profiteers do not wish to end strife and elevate society—- they only wish to profit from perpetually sustaining hate, dependence and poverty.

Serious events are about to hit the US Economy. Do you know about the 37 food items that vanish first in a crisis? Click to see how to get them in this video here

“There is a class of colored people who make a business of keeping the troubles, the wrongs, and the hardships of the Negro race before the public. Having learned that they are able to make a living out of their troubles, they have grown into the settled habit of advertising their wrongs-partly because they want sympathy and partly because it pays. Some of these people do not want the Negro to lose his grievances, because they do not want to lose their jobs.”

In conclusion it is obvious that dividing people into hyphens and groups is only a tool for power and wealth. It is time we break this bondage of race and bind the nation together as one—- under the name American.