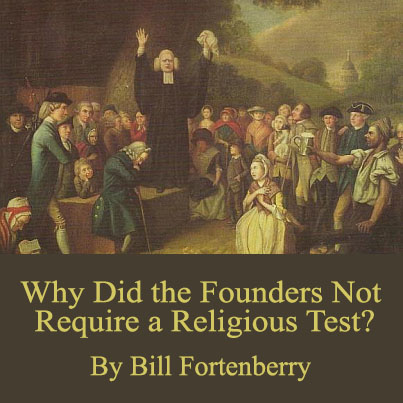 Ever since the Constitution was first submitted for ratification, the final clause in Article VI has been a matter of strong contention among Americans.  That clause, known as the religious test clause, simply states that “no religious Test shall ever be required as a Qualification to any Office or public Trust under the United States.”  It is frequently claimed that this clause represents the desire of the founding fathers to keep religion out of the government and to establish a secular nation.  But is that really how this phrase was intended to be used?

To understand the true purpose of the religious test clause, we must hearken back to the Corporation Act of 1661. This was the first of three Test Acts which were implemented in England and which remained in effect until 1828. Under these acts, no one could hold office in England unless he swore an oath of fealty not to God but rather to the doctrines of the Church of England. This was the kind of religious test which the founders prohibited. They had no objection to biblical qualifications. What they objected to was the requirement that all government officials be forced to swear allegiance to the codified doctrines of an established church.

The wisdom of this objection can be illustrated by an examination of the different doctrines of the Christian churches on baptism.  Some churches teach that baptism is necessary in order for one to become a Christian while others teach that baptism is not necessary but merely symbolic.  There is no reconciliation between these two views.  Those holding to the first view often deny the Christianity of those holding to the second and vice versa.  Therefore, if the founding fathers had permitted religious tests by saying that only Christians could hold office under the new Constitution, they would have placed us in the difficult position of allowing our government to determine which of these two views on baptism is correct.  The churches would immediately have recognized that whichever church managed to obtain a majority representation in the new government would have the power to define all other denominations as non-Christians and force them out of the political arena entirely.  This is exactly how the Test Acts were used in England, and it was one of the reasons that so many Christians had fled to America in the first place.  Our founding fathers realized that the only way to prevent this abuse of the power of government is to eliminate the religious test requirements altogether.

That this is the view which the founders had in mind can be seen in the statement on this clause by Oliver Ellsworth.  Mr. Ellsworth was one of the pivotal drafters of the Constitution, and he later became the third Chief Justice of the Supreme Court.  In his defense of the religious test clause, Mr. Ellsworth first explained what was meant by the term “religious test”:

“A religious test is an act to be done, or profession to be made, relating to religion (such as partaking of the sacrament according to certain rites and forms, or declaring one’s belief of certain doctrines,) for the purpose of determining whether his religious opinions are such, that he is admissible to a publick office.”

He then proceeded to examine the most basic religious test possible and to demonstrate that it would be wrong for us to have such a test in America.

“If any test-act were to be made, perhaps the least exceptionable would be one, requiring all persons appointed to office to declare at the time of their admission, their belief in the being of a God, and in the divine authority of the scriptures … But I answer: His making a declaration of such a belief is no security at all. For suppose him to be an unprincipled man, who believes neither the word nor the being of God; and to be governed merely by selfish motives; how easy is it for him to dissemble! how easy is it for him to make a public declaration of his belief in the creed which the law prescribes; and excuse himself by calling it a mere formality. This is the case with the test-laws and creeds in England … In short, test-laws are utterly ineffectual: they are no security at all … If they exclude any persons, it will be honest men, men of principle, who will rather suffer an injury, than act contrary to the dictates of their consciences. If we mean to have those appointed to public offices, who are sincere friends to religion, we, the people who appoint them, must take care to choose such characters; and not rely upon such cob-web barriers as test-laws are.”

The final sentence of Mr. Ellsworth’s statement brings us back to our original question.  Did the founders include the religious test clause in order to establish a secular government?  Not at all.  They simply placed the responsibility for the religious character of our government on the shoulders of the people themselves.  If we have men in office today who are enemies to the Christian faith, then it is not the fault of the founding fathers but solely that of we the people.