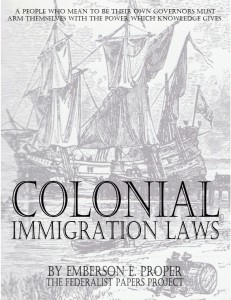 Get a FREE copy of “Colonial Immigration Laws” by Emberson E. Proper

The settlement and growth of the American Colonies, though carried on under English control and largely supplied by British subjects, was by no means confined to the inhabitants of that realm. America offered attractions to the daring and discontented, the oppressed and persecuted of all Europe.

Especially to the thrifty of all classes did the new world hold out tempting inducements. And so people of many nationalities and widely varying customs and creeds were among the early settlers ; the lowlands of Holland, the plains of France and the valleys of Germany and Switzerland each contributed to that band of sturdy immigrants, the American colonists.

It is doubtful whether England could have held this vast territory if she had pursued a policy of exclusion in its colonization. True, the other maritime powers of Europe, at the beginning of the seventeenth century, were in no condition to compete with her in this field ; but it is improbable, when we consider how comparatively feeble the colonies would have been had they depended for settlers on England alone, that she could have resisted the encroachments of France and Holland, or that she would have deemed it worth the effort.

The early idea that America was the much desired East, or, at least, a country of marvelous resources, whose river beds were lined with gold and precious gems, led to a very natural national exclusiveness. Every new discovery was thought to be a veritable treasure house, and naturally the sovereigns of the different countries deemed it prudent to reserve all rights for themselves and their liege subjects.

English leaders began to realize that there were fortunes in the natural products of their American grants, if properly developed. But this meant a permanent residence by actual settlers instead of temporary occupation by bands of adventurers, and the early years of the seventeenth century were rife with schemes of colonization. Settlements were made in the face of the greatest obstacles and received every encouragement from the crown.

The economic theories of the time, however, made national greatness depend on a dense population, and England could ill afford to spare the requisite quotas of people to build up prosperous and populous colonies ; accordingly we find the genesis of American cosmopolitanism in the early charters granted to the colonizing companies, which gave the promoters permission to transport not only liege subjects, but all such strangers as might be willing to present themselves.