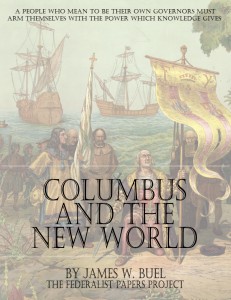 Get a FREE Copy of “Columbus And the New World” by James W. Buel

The story of Columbus is at once an epic and an elegy; a narration of bold conception, persistent courage, heroic attainment, mingled with the gall of national ingratitude and the malevolence of personal jealousies.

The adventures of the Homeric Ulysses were not more illustrious with valor; the afflictions of Niobe were not more tearful with despair.

No character in the world’s history was ever more highly honored for chivalrous achievement ; none more maligned by perfidy or oppressed by the spitefulness of malice.

If we consider the slavishly superstitious, the intolerantly bigoted, the audaciously savage age in which he lived, which was characterized by the most desperate impulses, we will be prepared to understand and to appreciate the disposition and proclivities of Columbus; to applaud his courage, and to condone his vices.

For he was not without human frailties, as will be shown, but these were national —medieval—rather than personal; errors of the times rather than passions peculiarly his own.

To download a copy of “Columbus And the New World” by James W. Buel please right mouse click on the link, then select “save as” and download to your computer – Columbus-And-The-New-World