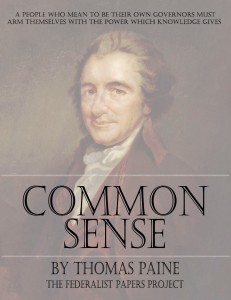 Get a FREE copy of “Common Sense” by Thomas Paine

Common Sense is a pamphlet written by Thomas Paine. and published in 1776, Common Sense challenged the authority of the British government and the royal monarchy. The plain language that Paine used spoke to the common people of America and was the first work to openly ask for independence from Great Britain.

It was first published anonymously on January 10, 1776, at the beginning of the American Revolution. Common Sense, was signed, “Written by an Englishman”, and it became an instant best-seller, both in the colonies and in Europe. It went through several editions in Philadelphia, and was republished in all parts of United America.

Common Sense by Thomas Paine presented the American colonists with an argument for freedom from British rule at a time when the question of seeking independence was still undecided. Paine wrote and reasoned in a style that common people understood. Paine structured Common Sense as if it were a sermon, and relied on Biblical references to make his case to the people.

To download your copy of “Common Sense” by Thomas Paine please right mouse click on the link, then select “save as” and download to your computer –  Common-Sense-by-Thomas-Paine