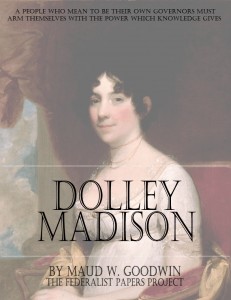 Get a FREE copy of “Dolley Madison” by Maud W. Goodwin

Dolley Payne Todd Madison (May 20, 1768 – July 12, 1849) was the spouse of the fourth President of the United States, James Madison, and was First Lady of the United States from 1809 to 1817. She was notable for her social gifts and helped define the role of the First Lady. Her success as a hostess contributed to increasing the popularity of Madison as president.

During the previous administration of Thomas Jefferson, a widower and their friend, she occasionally acted as First Lady for him to fulfill the ceremonial functions more usually associated with the President’s wife. She also aided in the completion and furnishing the interior of the newly constructed White House.

It would have been a bold soothsayer who had ventured to predict a brilliant social and worldly career for the little maiden who in Revolutionary days went tripping along the forest paths, under the shadow of Virginia pines, to the old field-school in Hanover County, where Dolly Payne learned her A B C’s.

In truth, no one could have looked less frivolous than this demure school-girl, with the sober gown reaching to the toes of her shoes, the long gloves covering her dimpled elbows, and the linen mask and broad-brimmed sun-bonnet, hiding her rosy face.