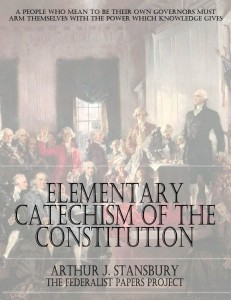 Get a FREE copy of “Elementary Catechism of the Constitution” by Arthur J. Stansbury

In order to help parents train their children in the principles of freedom and liberty, a famous little book was published by Arthur J. Stansbury, called the Elementary Catechism of the Constitution of the United States. It was designed specifically for the schools but was also read widely by many adults who felt the need to know more about the mechanics of our system of self-government as designed for a free American society.

Referring to the same early American time period Alexis de Tocqueville actually observed citizens whose parents had trained them while in their youth. He wrote:

“In New England every citizen receives the elementary notions of human knowledge; he is taught, moreover, the doctrines and the evidences of his religion, the history of his country, and the leading features of the Constitution. In the States of Connecticut and Massachusetts, it is extremely rare to find a man imperfectly acquainted with all these things, and a person wholly ignorant of them is a sort of phenomenon.”

He was also amazed about how much Americans knew concerning their own system of self-government. He wrote:

“It cannot be doubted that in the United States the instruction of the people powerfully contributes to the support of the democratic republic; and such must always be the case, I believe, where the instruction which enlightens the understanding is not separated from the moral education. An American should never be led to speak of Europe, for he will then probably display much presumption and very foolish pride. But if you question him respecting his own country his language will become as clear and precise as his thoughts.

He will inform you what his rights are and by what means he exercises them; he will be able to point out the customs which obtain in the political world. You will find that he is well acquainted with the rules of the administration, and that he is familiar with the mechanism of the laws. The American learns to know the laws by participating in the act of legislation; and he takes a lesson in the forms of government from governing. The great work of society is ever going on before his eyes and, as it were, under his hands.”

The early American experience stands in sharp contrast with our modern day situation where most young people and adults have not been properly taught about our system of government.