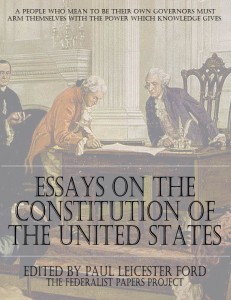 In the great discussion which took place in the years 1787 and 1788 of the adoption or rejection of the Constitution of the United States, one of the important methods of influencing public opinion, resorted to by the partisans and enemies of the proposed frame of government, was the contribution of essays to the press of the period.

The newspapers were filled with anonymous articles on this question, usually the product of the great statesmen and writers of that period. Often of marked ability, and valuable as the personal views of the writers, the dispersion and destruction of the papers that contained them have resulted in their almost entire neglect as historical or legal writings, and the difficulty of their proper use has been further increased by their anonymous character, which largely destroyed the authority and weight they would have carried, had their true writers been known.

From an examination of over forty files of newspapers and many thousand separate issues, scattered in various public and private libraries, from Boston to Charleston, the editor has selected a series of these essays, and reprinted them in this volume.

All had had a wide experience in law and government. Their arguments are valuable, not merely for their reasoning, but from their statement of facts. New light is thrown upon the proceedings in the Federal Convention, so large a part of which is yet veiled in mystery; and personal motives, and state interests, are mercilessly laid bare, furnishing clues of both the support of and opposition to the Constitution.

Subsequently most of the writers were prominent in administering this Constitution or opposing its development, and were largely responsible for the resulting tendencies of our government.