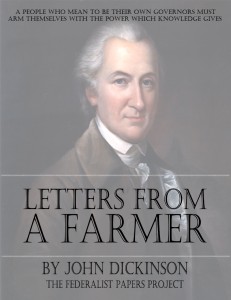 GET A FREE COPY OF “Letters from a Farmer In Pennsylvania” by John Dickinson.

Voices of dissent over Parliament’s growing authority upon the colonies in America were heard long before the colonists’ actual act of independence.

One of those voices was that of John Dickinson. A preeminent Philadelphia lawyer, Dickinson was elected to the Pennsylvania legislature in 1762 where he was active in protesting British policies. Attending the Stamp Act Congress in 1765, he advocated commercial retaliation. Dickinson’s writings entitled Letters from A Farmer in Pennsylvania were published in newspapers in 1767 and 1768.

Though conciliatory in tone, his Letters from A Farmer in Pennsylvania made clear that Britain’s policies were wrong and deprived the colonies of their lawful rights. Ultimately, Letters from a Farmer urge united action on the part of the colonists.

Dickinson went on to become a member of the Continental Congress, agreeing to the necessity of armed resistance. Later he helped draft the Articles of Confederation, and was an active participant in the Constitutional Convention of 1787.

Dickinson wrote 13 letters in all, published as a pamphlet that went through at least ten editions. His Letters had a significant impact on political thought not only in America but also in England.