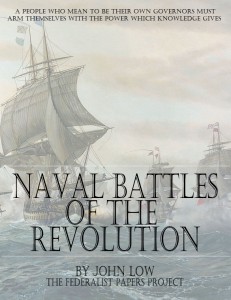 The naval operations of the American Revolutionary War divide themselves naturally into two periods. The first ranges from 1771 until the winter of 1779, as the Royal Navy was engaged in cooperating with the troops employed against the American revolutionaries, on the coasts, rivers and lakes of North America, or in endeavoring to protect British commerce against the enterprise of American privateers.

During the second period, the successive interventions of France, Spain, and the Netherlands extended the naval war until it ranged from the West Indies to the Bay of Bengal. This second period lasted from the summer of 1778 to the middle of 1783, and it included operations already been in progress in America or for the protection of commerce, and naval campaigns on a great scale carried out by the fleets of the maritime powers.