Get a FREE Copy of “ 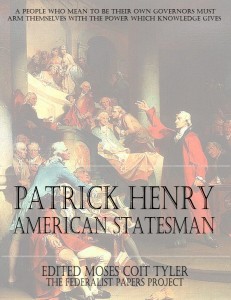 Patrick Henry was a brilliant orator whose devotion to the pursuit of liberty fueled the fire of the American Revolution. As a lawyer and a member of the Virginia House of Burgess, Henry spoke eloquently of the inalienable rights all men are born with. His philosophy inspired the Declaration of Independence, the Constitution, and, most significantly, the Bill of Rights. Famous for the line “Give me liberty or give me death!” Patrick Henry was a man who stirred souls and whose dedication to individual liberty became the voice for thousands.

Patrick Henry was a consistent advocate of State Rights, and was ever jealous of any infringement upon them. For that reason, he was opposed to the Federal Constitution, and in the Virginia convention, called in 1788, to consider it, he opposed its ratification with all the power of his great eloquence. He finally acquiesced, when it became the organic law of the Republic, and used all his efforts to give it a fair trial and make it successful.