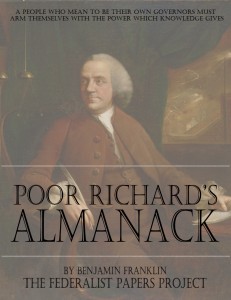 Poor Richard’s Almanack was published yearly by Benjamin Franklin under the pseudonym of “Poor Richard” or “Richard Saunders”. The publication appeared continually from 1732 to 1758. It was a best seller for a pamphlet published in the American colonies; print runs reached more than 10,000 per year.

This 91 page booklet contains a selection of writings and saying from Poor Richards Almanack from 1733-1758.

The mission of the Federalist Papers Project is to educate Americans on the principles of government that turned our country into the greatest, richest and most powerful country in the history of the planet while remaining a beacon for freedom and opportunity

To download a copy of “Poor Richard’s Almanack” by Benjamin Franklin please right mouse click on the link, then select “save as” and download to your computer – Poor-Richards-Almanack