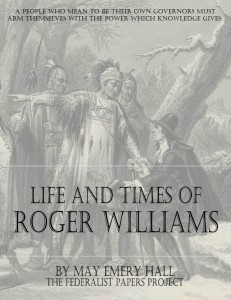 Roger Williams was famous as a leader of the Rhode Island Colony. Roger Williams (1603 – 1683) was a Puritan dissident and theologian who left England to migrate to the New World. He was a supporter of religious freedom and the separation of church and state.

In 1636 his strong views clashed with those of John Winthrop, the governor of Massachusetts who banished him from the strictly Puritan colony. Roger Williams fled the Massachusetts Colony and established a colony for religious dissidents, which later became the state of Rhode Island. Rhode Island earned the nickname of ‘Rogue Island’ due to its mixture of settlers from all religious backgrounds.

Roger Williams believed that all human beings were equal in the eyes of God. He carried out this belief throughout his life in his dealings with the Indians. His own words say it best. “Nature knows no difference between Europe and Americans in blood, birth, bodies etc. God having of one blood made all mankind.”