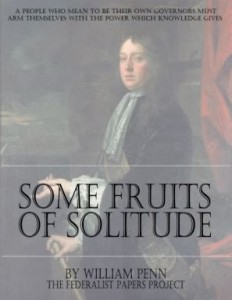 Get a FREE copy of “Some Fruits of Solitude” by William Penn:

WILLIAM PENN, the founder of Pennsylvania, was the son of Sir William Penn, a distinguished English Admiral. He was born in 1644. His boyhood was marked by a combination of pietism with a strong interest in athletics, and he was expelled from Oxford for nonconformity.

After leaving the University he traveled on the Continent, served in the navy, and studied law. In 1667 he became a Quaker, and in the next year he was committed to the Tower for an attack on the orthodoxy of the day. During his imprisonment he wrote his well-known treatise on self-sacrifice, “No Cross, No Crown”; and after his release he suffered from time to time renewed imprisonments, till he finally turned his attention to America as a possible refuge for the persecuted Friends.

In 1682 he obtained a charter creating him proprietor and governor of East New Jersey and Pennsylvania, and, after drawing up a constitution for the colony on the basis of religious toleration, he sailed for his new province. After two years, during which the population of the colony grew rapidly through emigration from Germany, Holland, and Scandinavia, as well as Great Britain, he returned to England, where his consultations with James II, whom he believed to be sincere in his professions of toleration, led to much misunderstanding of his motives and character.

At the Revolution of 1688 he was treated as a Jacobite, but finally obtained the good-will of William III, and resumed his preaching and writing. In 1699 he again came to America, this time with the intention of remaining; but two years later he went home to oppose the proposal to convert his province into a crown colony. Queen Anne received him favorably, and he remained in England till his death in 1718.

Penn’s voluminous writings are largely controversial and his interpretation and defense of Quaker doctrine remain important; and the “Fruits of Solitude,” here printed, is a mine of pithy comment upon human life, which combines with the acute common sense of Franklin the spiritual elevation of Woolman.

To download a copy of “Some Fruits of Solitude” by William Penn please right mouse click on the link, then select “save as” and download to your computer – Some-Fruits-Of-Solitude-By-William-Penn