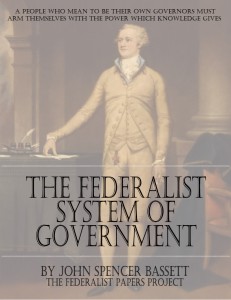 THE winter of 1788-1789 saw the dissolution in the United States of an inefficient form of government and the inauguration in its stead of a stronger union. Much that transpired in the preceding years showed that the change was necessary. The heavy debt of the nation was running up and thus begetting contempt for America abroad and serious discontent at home.

The states were growing openly jealous of one another, and it seemed likely that the breaches which had been made would become wider rather than narrower. There were serious foreign problems which the older authorities had not been able to settle, among them the execution of the British treaty of 1783, and the right to navigate the Mississippi River.

The weakness of the central authority was evident to all, and to none more than to those who attempted to exercise it. Out of these dangers there was no other way than to create a government strong enough to manage the finances, restrain local antagonisms, and uphold the national dignity abroad. Such a way was found in the constitution which was framed in the summer of 1787 and adopted in the twelve months following. The old government went out of existence quietly and this volume tells the exciting story of what happened next.