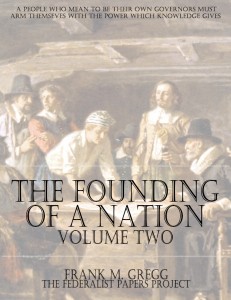 Get a FREE copy of “The Founding of a Nation; The Story of the Pilgrim Fathers – Volume Two” by Frank M. Gregg

To thoroughly understand the historical setting, it is essential that one discriminates between the Pilgrims and the Puritans, often confounded in the popular mind as being one and the same, when as a matter of fact they were entirely different.

The name “Pilgrims” was given to the Plymouth colonists by Governor William Bradford, who was a passenger on the Mayflower. The name “Puritans” was applied to the church and state reformers of all classes in England in the early part of the seventeenth century by the supporters of the court and king.