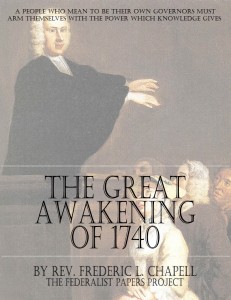 Get a FREE copy of “The Great Awakening of 1740” by Rev. Frederic L. Chapell

The chief religious fact of the eighteenth century, the great revival of spiritual religion, is usually termed the Great Awakening of 1740, because its chief intensity, in this country, culminated about that time.

But it was by no means confined to that year. It commenced more than a decade before that date and continued with power more than a decade after it. Yea, more ; it is continuing yet, for the revivals with which we are repeatedly visited, are but the echoes and reverberations of that mighty blast of the gospel trumpet which then awoke a slumbering church and a slumbering world.

Let me begin by noting some of the political and material facts of history at this time. And the first thing that strikes us Americans is that this great republic of the Western world had not then come into being. There was in America only a line of colonies on the Atlantic seaboard, containing not more than two million inhabitants.

New York, Boston, and Philadelphia were hardly more than overgrown villages. George II was our king. Slavery existed in Massachusetts and Connecticut, as well as in Georgia and South Carolina, while numbers of Indians swarmed around the young and growing settlements. Yet the colonies were so far established as to have come into a secure and comfortable position, while the disaffection toward England, that afterward produced the Revolution, had not then arisen.