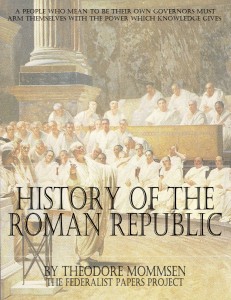 We may divide Roman history for convenience sake into periods according to the form of government in use. 1. Regal period, our knowledge of which is very slight and indirect. 2. Republican period. 3. Imperial period. It is with the second of these that we are concerned.

This history of the Roman republic traces the rise of a small city state near the Tiber estuary into a power that controlled the Italian peninsula and created the final Empire of antiquity, an Empire that was to become both the most enduring in the ancient world and to have the most far-reaching consequences for posterity.

Whilst this book is chronologically organized, giving the reader a clear sense of the historical progress and dynamics of Roman republican history, it also offers a coherent overview of the culture, economics, religion and military might of the Roman empire, presented in a stimulating way.

Thoroughly referenced with a wealth of primary sources from great Roman writers such as Cicero and Plutarch, “The History of the Roman Republic” is essential reading for those interested in the history of the Ancient world and its legacy.