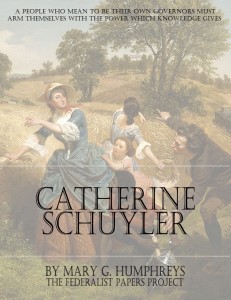 Get a FREE copy of “The Life of Catherine Schuyler” by Mary G. Humphreys

The period embraced within the years of Catherine Schuyler s life is the most exciting in American history. In its military aspect it comprehends the French and Indian War and the Hevolution. In its political aspect it includes the life of the Colony and the beginnings of the Nation.

Through the position of her own family and as the wife of General Philip Schuyler, she is a representative figure among the women of the Dutch Colony and the matrons of the Revolution. At the same time, in her own character she was so domestic, retiring, and unobtrusive that many of the details of her life can only be discovered indirectly and with difficulty.

Catherine Van Rensselaer Schuyler (1734-1803) was born in Claverock, Columbia County, New York, into a wealthy Dutch family. She was well educated and attractive, and in 1755 married Phillip John Schuyler, who was also from a wealthy land-holding family. Years later, the couple inherited land-holdings near Albany, NY, and built an estate there with wheat fields.

During the Revolutionary War, John Schuyler was appointed a major-general under General Washington. In 1777, General Burgoyne and his British troops attempted to make their way down the Hudson Valley, but met a great deal of resistance from the Americans who were creating road blocks, destroying provisions, and doing anything necessary to make Burgoyne’s trip difficult.

On her husband’s orders, Mrs. Schuyler bravely made her way to their estate near Albany to burn the vast and profitable wheat fields, and to request that his tenants do the same in order to prevent the British from harvesting them.