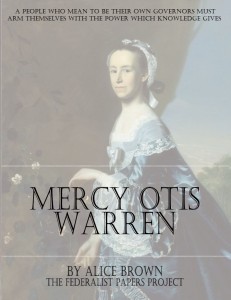 Mercy Otis Warren, sister of James Otis, was born in Barnstable, Massachusetts September 1728. She was important as a political writer and propagandist of the American Revolution. In 1754 she married James Warren of Plymouth Massachusetts, a college friend of her brother. Her literary inclinations were fostered by both these men, and she wrote poems, essays and plays.

In the eighteenth century, topics such as politics and war were thought to be the province of men. Few men and fewer women had the education or training to write about these subjects. Warren was an exception. During the years before the American Revolution, Warren published poems and plays that attacked royal authority in Massachusetts and urged colonists to resist British infringements on colonial rights and liberties.

During the debate over the United States Constitution in 1788, she issued a pamphlet, written under the pseudonym “A Columbian Patriot,” that opposed ratification of the document and advocated the inclusion of a Bill of Rights. In 1790, she published a collection of poems and plays under her own name, a highly unusual occurrence for a woman at the time.

She died on October 19, 1814, in Winslow house in Plymouth, Massachusetts. She strongly believed in independence, liberty, and in the power of the written word.