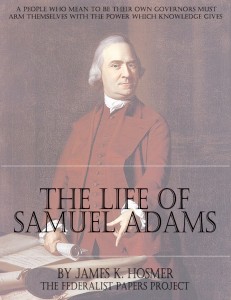 Get a FREE copy of “The Life of Samuel Adams” by James K. Hosmer:

Among those who signed the Declaration of Independence, and were conspicuous in the revolution, there existed, of course, a great diversity of intellectual endowments; nor did all render to their country, in those perilous days, the same important services.

Like the luminaries of heavens each contributed his portion of influence; but, like them, they differed, as star differeth from star in glory. But in the constellation of great men, which adorned that era, few shone with more brilliancy, or exercised a more powerful influence than Samuel Adams.

Samuel Adams’s writings were voluminous, but unfortunately, as they generally related to the temporary politics of the day, most of them are lost. Those which remain furnish abundant proof of his superiority as a writer, of the soundness of his political creed, and of the piety and sincerity of his character.