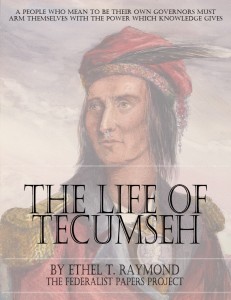 Get a FREE copy of “The Life of Tecumseh” by Ethel T. Raymond

Tecumseh was a Shawnee chief born circa 1768 near present-day Springfield, Ohio. He opposed the United States and attempted to organize a confederation of tribes to resist white settlement.

During the closing decades of the 18th century, Indian lands west of the Appalachian Mountains were increasingly threatened by colonization. The boundary that Great Britain had tried to erect by the Quebec Act of 1774 was shattered by the American revolution, and in the following years the Americans extended their settlements, often at Indian expense. Indian resistance to this expansion resulted in three major battles over the Ohio country.