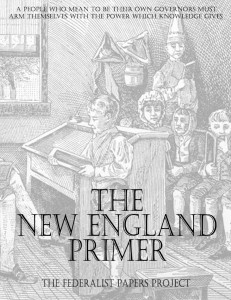 Get a FREE copy of “The New England Primer”

The New England Primer was the first textbook ever printed in America and was used to teach reading and Bible lessons in our schools until the twentieth century.

Scholars agree that most, if not all, of the Founding Fathers were taught to read and write using The New England Primer, a textbook which is unsurpassed to this day for its excellence of practical training.

First published in 1690, the goal of the Primer was to combine the study of the Bible with the alphabet, vocabulary, and the reading of prose and poetry. This is the book that introduced the children’s prayer, “Now I lay me down to sleep,” and which made the “Shorter Catechism” a staple of education for American children. More than five million copies were sold in the nineteenth century alone!

In the early colonial period, reading the Bible was the primary reason and motivation for learning to read. For example, in 1647, the “Old Deluder Act” was passed by the Massachusetts General Court required every township with 50 or more families to hire a teacher.

This is a reprint of the 1777 version used in many schools during the Founding Era. A great resource for homeschoolers or for use in any classroom.