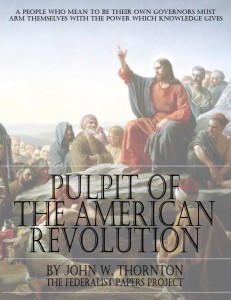 Get a FREE copy of “The Pulpit of the American Revolution” by John W. Thornton

The true alliance between Politics and Religion is the lesson inculcated in this volume of Sermons, and apparent in its title, ” The Pulpit of the Revolution.” It is the voice of the Fathers of the Republic, enforced by their example.

They invoked God in their civil assemblies, called upon their chosen teachers of religion for counsel from the Bible, and recognized its precepts as the law of their public conduct. The Fathers did not divorce politics and religion, but they denounced the separation as ungodly. They prepared for the struggle, and went into battle, not as soldiers of fortune, but, like Cromwell and the soldiers of the Commonwealth, with the Word of God in their hearts, and trusting in him.

This was the secret of that moral energy which sustained the Republic in its material weakness against superior numbers, and discipline, and all the power of England. The Union of the colonies was a condition precedent to American Nationality. One nationality, and that of a Protestant people, was essential to constitutional liberty in America.