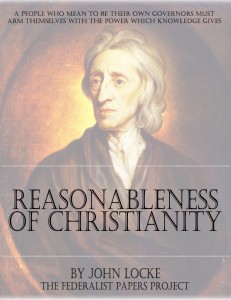 Get a FREE copy of “The Reasonableness of Christianity” by John Locke:

In 1695 John Locke published “The Reasonableness of Christianity”, an enquiry into the foundations of Christian belief. He did so anonymously, to avoid public involvement in the fiercely partisan religious controversies of the day.

In “The Reasonableness of Christianity” John Locke considered what it was to which all Christians must assent in faith; he argued that the answer could be found by anyone for themselves in the divine revelation of Scripture alone. He maintained that the requirements of Scripture were few and simple, and therefore offered a basis for tolerant agreement among all Christians, and the promise of peace, stability, and security through toleration.

Though modern interest has focused particularly on Locke’s philosophy and political theory, increasing attention is being paid to his religious thought. These different strands cannot be understood properly in isolation from each other: so the broader aim of this edition is to help towards an improved understanding of his religious thought in the context of his work as a philosopher, political theorist, and exponent of religious toleration.