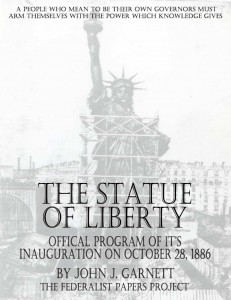 Get a FREE copy of “The Statue of Liberty – The Official Program of its Inauguration” by John J. Garnett

THE year 1886 witnesses the completion and dedication to the cause of human liberty of one of the grandest ideas that was ever conceived in the brain of man.

The Bartholdi Statue of Liberty on Bedloe’s Island is the offspring of a sublime idea, and its progress has been watched from its inception to its final completion with great interest by all the civilized nations of the world.

France, after passing through many exciting and perilous episodes in her career as a nation, having been in turn an empire and a republic, now in the latter capacity extends the hand of liberty, fraternity and equality to her sister in the West whom she helped in her hour of distress, and endorses by her actions the primal truth that liberty and equality are the grandest principles upon which a people can be governed.