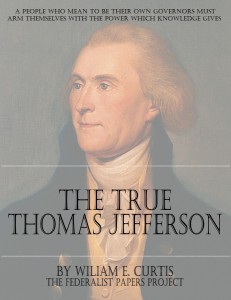 Get a FREE copy of “The True Thomas Jefferson” by William E. Curtis

The True Thomas Jefferson is not a formal biography, it is intended to be a series of sketches as graphic and as accurate as possible, without partisanship or prejudice, of a remarkable man.

Thomas Jefferson has been the subject of several able and distinguished biographers, friendly and unfriendly, for whom he left an abundance of material carefully arranged by his own hand. His writings, public and private, which are more voluminous than those of any other American statesman, have twice been published, and furnish direct evidence concerning his acts and opinions.

His views upon public questions have been carefully arranged in alphabetical order in an encyclopedia, to which the student of his life and times may turn with satisfaction and confidence. From these and many other original sources the information presented in this volume has been gathered and arranged in unconventional form in order that the reader may see the man as he actually was, and not as his partisans and opponents represent him.

The purpose of his life, which appears on almost every page, was to build a nation upon this continent with human freedom and equality as its foundations. In his efforts to accomplish this end he often incurred the criticisms of his friends as well as the condemnation of his enemies. His faults were as conspicuous as his abilities, and to form a correct estimate of his character both should receive equal and honest consideration.