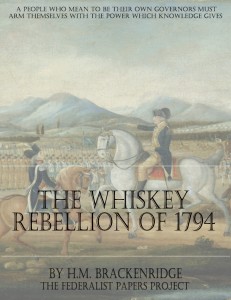 Get a FREE copy of “The Whiskey Rebellion of 1794” by H.M. Brackenridge:

Angered by an excise tax imposed on whiskey in 1791 by the federal government, farmers in the western counties of Pennsylvania engaged in a series of attacks on excise agents.

The tariff effectively eliminated any profit by the farmers from the sale or barter of an important cash crop, and became the lightning rod for a wide variety of grievances by the settlers of the region against the federal government.

While citizens in the east did not find it difficult to abide by the concept that individual states were “subservient to the country,” people west of the mountains were less accepting of decisions made by the central government.

The rebel farmers continued their attacks, rioting in river towns and roughing up tax collectors until the so-called “insurrection” flared into the open in July of 1794 when a federal marshal was attacked in Allegheny County, Pennsylvania. Almost at the same time several hundred men attacked the residence of the regional inspector, burning his home, barn and several outbuildings. Pittsburgh was another scene of disorder by enraged mobs.

On August 7, 1794, President Washington issued a proclamation, calling out the militia and ordering the disaffected westerners to return to their homes. Washington’s order mobilized an army of approximately 13,000 — as large as the one that had defeated the British — under the command of General Harry Lee, the then-Governor of Virginia and father of Robert E. Lee. Washington himself, in a show of presidential authority, set out at the head of the troops to suppress the uprising.

This was the first use of the Militia Law of 1792 setting a precedent for the use of the militia to “execute the laws of the union, (and) suppress insurrections,” asserting the right of the national government to enforce order in one state with troops raised in other states. Even more importantly, it was the first test of power of the new federal government, establishing its primacy in disputes with individual states. In the end, a dozen or so men were arrested, sent to Philadelphia to trial and released after pardons by Washington.