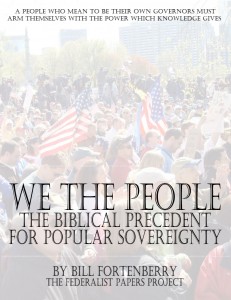 Modern accounts of the philosophical underpinnings of the American Revolution often attribute the concept of popular sovereignty to men such as Thomas Hobbes, John Locke and Jean-Jacques Rousseau with Locke being the one most often praised as the source of the American ideal of a government of the people, by the people and for the people.

To make this attribution, however, modern scholarship has had to ignore or, perhaps, forget the previously held view that the notion of popular sovereignty can be traced to the government of ancient Israel as recorded in the pages of the Bible.

As a result, many students of American history are completely unaware of any link between the doctrines of Scripture and the foundational principles of American government. This paper is an attempt to remedy this defect through a review of both the political theory of the Bible and the recognition of that theory by the philosophers of several ages leading up to the American Revolution.