It’s all the rage on the Left right now: more jobs have been created during President Obama’s tenure than George Bush’s. Praise be to government, they did it!

Except, no they didn’t. Quite the opposite actually.

CNN Wire reported that 11.3 million jobs were created during Barack Obama’s tenure as President, and that the economy has been growing for 75 straight months; a new record of continued growth.

However, it is important to delve deeper into these numbers to get a fuller understanding of what they truly mean. When the numbers are viewed in light of other important economic indicators, and not in a vacuum, one can clearly see that this is not as strong an economy as the Left wants you to believe.

So why is 11.3 million new jobs not a sign of economic recovery? Because the kind of jobs that were created are largely part time, or are in industries not designed for career-style work (fast food, retail, restaurant, etc.). While these jobs are increasing in number, it does not mean that the economy is stronger.

In fact, the indication may be the exact opposite.

Consider it this way: let’s say an industrial company lays off 10 full-time salaried employees at the plant because of the regulatory war waged by the federal government. Over a period of several months, those 10 people get jobs elsewhere, in addition to 10 others who were already looking for work.

Now, it is important to consider the quality of the jobs that these people enter. In a strong economy, each of these people could find similar positions at other companies. But here, in this hypothetical example, they have to take jobs for which they are severely over-qualified: retail workers, fast-food workers, etc.

Could one, in an intellectually honest way, say that the economy is doing well because 20 people found work? No, because the quality of the jobs does not contribute to a higher per capita income. The overall number of jobs is greater, but the fact that these jobs are transitory and less-paying undermines the notion that this is a good economic situation.

This is exactly what is happening with the numbers in the Obama economy, and the December jobs report is a perfect example of that.

…according to the BLS at least, some 155,000 seasonally adjusted jobs were added in December, arbitrarily goalseeked as they may have been. Where were they?  Here is the answer: 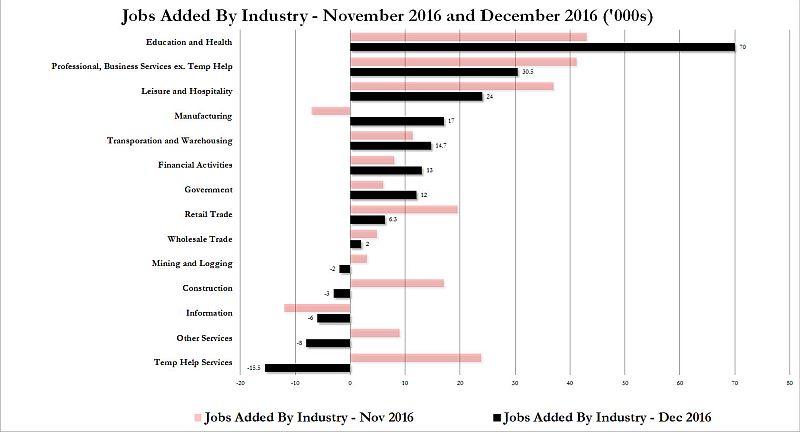 Additionally, one also has to consider the labor force participation rate, a much broader look at the overall employment market than the unemployment rate.

According to CNS News, the labor force participation rate greatly decreased during the Obama years. The number of Americans no longer in the labor market now stands at a staggering 95,102,000, an 18% since his inauguration.

The participation rate dropped to a 38-year low of 62.4 percent on Obama’s watch, in September 2015. It was only 3-tenths of a point higher than that last month.

One of the important things to note is that those who have stopped looking for work do not fall under the “unemployed” category; therefore, when the unemployment rate is displayed as a measure of economic health, it’s really a farce. The actual number of people who do not have gainful employment is far greater than the unemployment rate actually suggests.

So next time you hear someone say that unemployment is low, and that shows a strong economy, remind them of this.