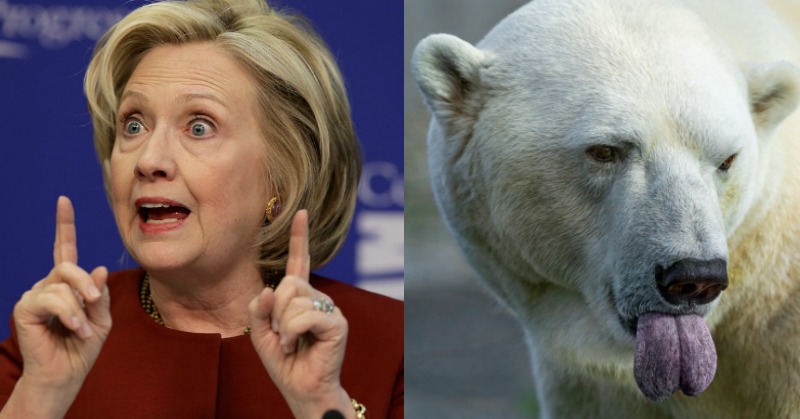 WikiLeaks released the sixth installment of emails hacked from the Gmail account of Hillary Clinton’s campaign chairman, John Podesta, on Thursday. In one of the emails, it was revealed that the Clinton campaign falsified data on climate change.

Climate change is a massive farce pushed by globalists in an effort to tear down the U.S. economy — and the economy of other developed nations — in order to gain control and push for a global government.

In one of the emails released by WikiLeaks, the Clinton campaign admitted that they “pumped up the climate impacts” as they falsified the data about emissions output.

Take a look at an excerpt of the email below reported by Vessel News (emphasis in bold is theirs):

Recirculating both the fact sheet and op-ed reflecting edits and comments from Jake, Nikki, and Joel. In answer to research: changed 20 to 40, and Trevor can provide calculations based on EIA data, if reporters need it, on the Mexico/Canada trade point. It isn’t written up neatly in one place online, unfortunately. Joel, we pumped up the climate impacts but in discussing with Jake decided we do still need to address why she’s making her position known, when she has previously said she will wait for the President to make a decision. Added a line about wanting to let voters know where she stands, and added a more expansive graf about making the US the leader in fighting climate change and becoming a clean energy superpower. Nipped and tucked elsewhere to keep the word count down. Knowing we are still working out rollout timing – comms, policy, political, do you clear these to go forward to the book? Thanks all. 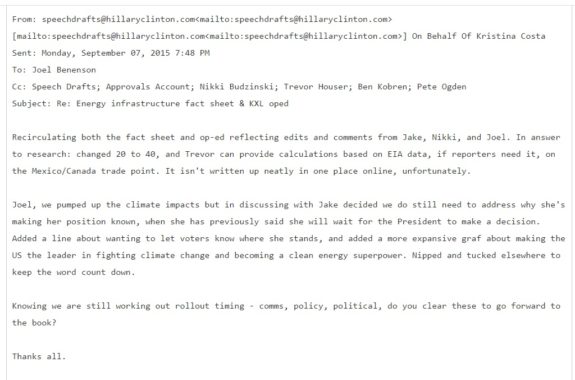 It’s pretty bad that they have to pump up data when the science that their radical agenda is based on is junk in the first place. They have to rely on fear mongering even though what they’re proposing — the decimation of our economy — is far more devastating and frightening than some dubious claims about polar bears.

What should frighten people are the numerous revelations from the Podesta emails — not to mention everything we already knew — about Clinton and her campaign.

We got confirmation from the emails that Clinton hates the phrase “everyday Americans” and her campaign disparaged conservative Catholics and Latinos.

Excerpts from Clinton’s Wall Street speeches were finally released in which information about Clinton’s vision of a hemispheric government — which is a step toward a one world government/new world order — was evidenced along with many other damning revelations. In the Wall Street speeches, Clinton also noted how politicians have to have different positions in public and in private.

The Podesta emails also revealed that the left has actively conspired to create an “uninformed and compliant citizenry” — which, along with Clinton’s anti-Second Amendment agenda, should greatly concern Americans should Clinton be elected president.

As Clinton and President Obama encourage people to concern themselves with the junk science that is climate change, they are actively distracting Americans from the fact that Clinton, not climate change, will burn this country to the ground.