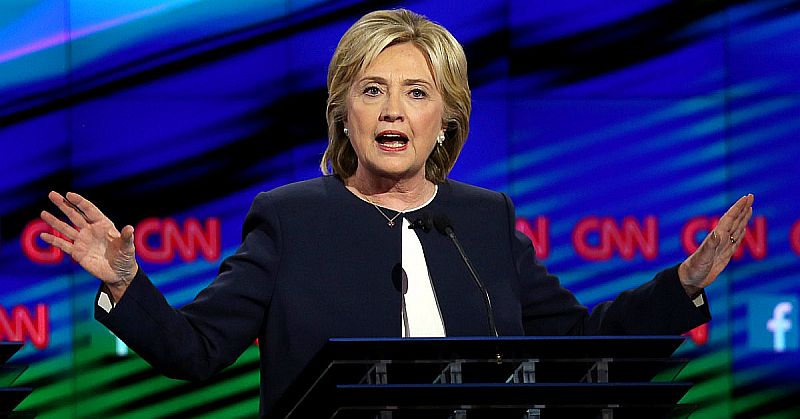 The Democrats really have a knack for resurrecting all sort of economic fallacies. The fallacious myths about the cause of the Great Recession is one of their most notable areas of unscrupulous sophistry.

On the debate stage earlier this week, Hillary Clinton once again gave a completely false narrative about the causes of the Great Recession.

Related: Ten Charts From Harvard That DESTROY The Myth Of An ‘Obama Recovery’

“We had the worst financial crisis, the Great Recession, the worst since the 1930s,” she said. “That was in large part because of tax policies that slashed taxes on the wealthy, failed to invest in the middle class, took their eyes off of Wall Street, and created a perfect storm.”

Except, that’s not the case at all; not even close.

It was not low taxes and regulation that led to an out of control Wall Street, but undue persecution of businesses at the hands of the federal government. Let’s take a closer look.

Jack Cashill at American Thinker explains that taxes had nothing to do with the Recession, but it was the collapse of the subprime mortgage market that was fueled by pressure from the Department of Housing and Urban Development.

This pressuring of banks to give out loans to subprime lenders, or those who otherwise could not afford home loans, started in the 1990s, and fueled the housing bubble that drove the Recession.

The Clintons wanted to push those numbers up. If they had been inclined to look, the explanation for the decline was simple enough: the collapse of the two-parent family. From 1970 to 2000, single-parent households, disproportionately black, increased 60 percent. In that same period, married couples with their own children fell from 40 percent of all households to just 24 percent.

This is a key issue here. Clinton and his Leftist allies made the issue about race rather than about simple economics, which is at the core of the real issue; not some fabricated figment of the racist imagination.

The Clintons saw racism as the cause of falling home ownership rates among minorities specifically. They looked at the rate of home loans approved for black Americans compared to white Americans. The rate for the former was 61%, while the latter was 77%. So what do they do to tout the racist line of reasoning?

To make the racism story line work, the Clintons had to ignore another significant set of data, namely, default rates. A comprehensive HUD study of FHA loans for the years 1992-1999 found that blacks were defaulting more than twice as frequently as whites, and Hispanics were defaulting three times more frequently. If minorities had been held to a higher standard, their default rates should have been lower than whites, not higher. This was obvious.

So what happened under the Clinton administration’s leadership?

Using HUD as a weapon against lenders, pressuring them to grant loans to people who, statistically, had a significant chance of defaulting on their home loans. If the lenders did something as silly as declining to take on high-risk loans, that would just be racist, and we just cannot have that now, can we…

Related: RUSH IS RIGHT: This Person Caused the Housing Crisis

It does not matter if child #2 is adopted or of the same flesh and blood–behavior and historical trends are at the heart of the issue, regardless of other immutable characteristics. This is something that the Clinton administration and HUD simply could not understand in their clouded minds.

HUD, which Congress had made the regulator of Fannie Mae and Freddie Mac in 1992, began to pressure these agencies to set numerical goals for affordable housing, even if that meant buying subprime mortgages. The media cheered the agencies on. A September 1999 Times article commended Fannie Mae for prodding banks to provide mortgages to those whose credit was “not good enough to qualify for conventional loans.”

With a gun to their head, the lenders turned to Fannie Mae and Freddie Mac to relieve them of the imprudent loans they were now being forced to make. Before the 1990s, Fannie and Freddie had sufficiently tough lending standards that default was not much of an issue. That would change.

In 1999, the Clintons’ newly appointed CEO, Franklin Delano Raines, was boasting of the changes Fannie Mae had already made and the changes to come. As he told the Times, Fannie Mae had lowered the down payment requirements for a home and now planned to extend credit to borrowers a “notch below its traditional standards.” That notch was spelled subprime.

Given the greater risk, subprime prospects typically have had to pay more interest to secure a loan. For investors, high interest translated into high yield. In October 1997, the investment banks Bear Stearns and First Union Capital Markets underwrote the first securitization of subprime loans for a total of $385 million.

See how the bubble began to build? It was countless high-risk loans that were bound to fail that caused the housing bubble, and when the bubble burst, we got the Great Recession.

“Give them the money, or else.”

Unless a bank wants to be shut down either by the federal government, or by feckless community organizers like ACORN (as Cashill describes in acute and important detail), they will cave to the pressure.

It’s not like no warnings were ever heard about this bubble; in fact, the alarms were raised years before the bubble burst and the Recession began. And by none other than President George W. Bush himself.

Despite his concerns, and many, many others, the Left continued to push their crazed fantasy of universal home ownership back by government entities Fannie Mae and Freddie Mac. In 2005, Congressman Barney Frank, ranking Democrat on House Financial Services Committee, arrogantly claimed that such concerns were ridiculous.

“You are not going to see the collapse that you see when people talk about a bubble,” he lectured his colleagues. “So those on our committee in particular are going to continue to push for homeownership.”

And push they did. Subprime credit had become, what one wag called, “the mad cow disease of structured finance.” With a clean bill of health from the media and the Democrats, and a shockingly ignorant assist from Wall Street, the infected product was allowed to poison the entire economy.

And what did we get? Just a few years later, the bubble burst, as it inevitably was going to. Nothing could stop it. Once a government-grown bubble start to grow, the only way to stop the growth is to pop it.

It was not a free market that caused the Recession; it was the government, as Yaron Brook of Forbes wrote in 2008 at the start of the Recession.

There has been no free market in housing or finance. Government has long exercised massive control over the housing and financial markets–including its creation of Fannie Mae and Freddie Mac (which have now amassed $5 trillion in liabilities)–leading to many of the problems being blamed on the free market today.

The government has promoted bad loans not just through the stick of the CRA but through the carrot of Fannie Mae and Freddie Mac, which purchase, securitize and guarantee loans made by lenders and whose debt is itself implicitly guaranteed by the federal government. This setup created an easy, artificial profit opportunity for lenders to wrap up bundles of subprime loans and sell them to a government-backed buyer whose primary mandate was to “promote homeownership,” not to apply sound lending standards.

We are still dealing with the fallout of the Recession, but it seems like very few have learned the lessons about its causes. The same myths that caused the downturn are being touted by the Left once again in 2016; the Left has a widespread economic learning disability, it seems.

The now question is, who is willing to make the tough choice to cause a little bit of pain now in order to prevent a large amount of pain later?

Do you remove the gangrenous toe and cause the patient to lose a body part, or do you wait and allow it to consume the whole foot? Or even the whole leg?

There is a certain point when the disease has to be removed. As is the case with gangrene, government fueled bubbles are incredibly dangerous; but to end them, some pain will be involved.

Although it would be better if we decided to stop buying the lies of the Left and their ilk.

Related: What Elizabeth Warren Just Doesn’t Get About Taxes

Economic myths are dangerous, they don’t just exist and stay there. They influence people’s opinions and cause them to vote for those who tout these economic myths, like Hillary Clinton, Elizabeth Warren, Barack Obama, Bernie Sanders, etc. etc. etc.

Are you ready to wake up yet, America?